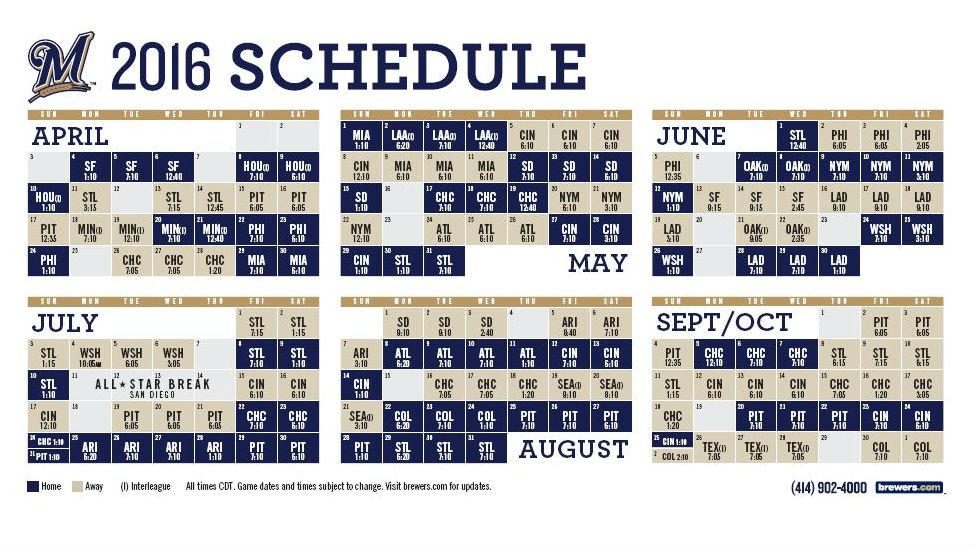 The Milwaukee Brewers have announced the complete schedule for the 2016 season, which includes all home and road times.

The Brewers open the regular season at home against the San Francisco Giants on Monday, April 4 at Miller Park (1:10 PM) in the start of a six-game homestand over seven days.  The season-opening homestand concludes with a weekend Interleague series against the Houston Astros.

The Interleague schedule features games against each team in the American League West Division, as well as four games in the border battle against the Minnesota Twins.  The Interleague schedule begins against the Houston Astros at Miller Park from April 8-10, and continues with a four-game home/away series against the Twins from April 18-21.  The Crew will take on the Los Angeles Angels of Anaheim for three games from May 2-4 at Miller Park, and will face the Seattle Mariners over a three-game series from August 19-21 at Safeco Field.  The team also plays a pair of two-game series against the Oakland Athletics – June 7-8 at home, and two weeks later, June 21-22, at O.co Coliseum.  The Brewers conclude Interleague Play with a three-game trip against the Texas Rangers from September 26-28 at Globe Life Park in Arlington during the final week of the regular season.

The Brewers will play at home on Memorial Day, May 30 vs. St. Louis and Labor Day, September 5 vs. Chicago-NL.  The team will visit the nation’s capital for the Fourth of July to open a three-game set against the Nationals (July 4-6).

All game dates and times are subject to change.