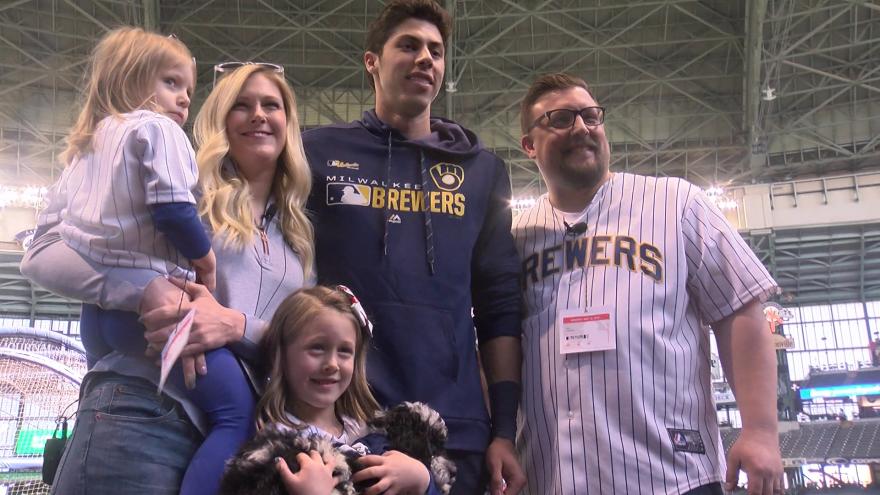 MUSKEGO, Wis. (CBS 58) -- It was the sign that captured hearts all over the country during Brewers opening weekend.

Two Muskego girls asked hometown MVP Christian Yelich to hit a home run so their dad would buy them a puppy.

Yelich happily obliged and the family has been on a quest ever since to find the perfect new family addition. On Monday, the two girls received a surprise delivery from Yelich himself.

UPDATE: They are going to name him Yeli. ? pic.twitter.com/J95rP1Rh5m

It was a perfect ending to where the story began after CBS 58's Pauleen Le's conversation with parents Mike and Jessica Labodda. They had mentioned how great it would be if the Brewers could do something special for their girls, 6-year-old Lola and 4-year-old Libby, whenever they found the perfect puppy. CBS 58 wanted to help the Laboddas out and put them in touch with the team.

The Brewers invited the family to batting practice before Monday's game. The parents were in on the surprise but the girls weren't.

When they least suspected it and with a puppy in arm, Yelich brought out the family's new mini Goldendoodle to surprise the sisters.

Their parents say it's a moment they will remember forever.

"For Christian Yelich to even think about doing something like this, it truly tells you that these players are here for the fans and it just truly, truly tells you what an amazing player he is," said dad Mike Labodda.

Mom and dad say the girls were surprised and pretty shocked when they met their puppy.

Tune into CBS58 Sunday morning on April 21 to see more of the special surprise.