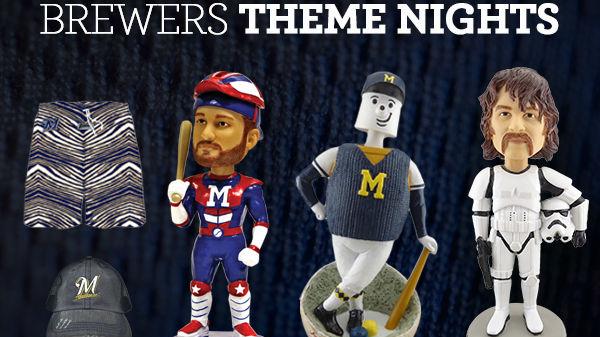 Come join the fun at Miller Park this season as several exciting theme nights are headed to the ballpark in 2016. Beginning Friday, February 19 at 10:00 AM, fans can buy special ticket packages to Superhero, Star Wars, Ghostbusters, ‘90s and Country Nights.  Special ticket packages for each theme night are limited and include entry to the game and a special themed promotional item.

Calling all caped crusaders and masked crime fighters – find the nearest phone booth, squeeze into your tights and fly to the Fortress of Miller Park for Superhero Night, presented by Kwik Trip.  On Saturday, April 30, join the fight as the Brewers look to defeat their arch-enemy, the nefarious Miami Marlins. Included in this special Superhero Night ticket package is a limited-edition Jonathan Lucroy Superhero Bobblehead, featuring the Brewers catcher as his alter ego, “The Protector.” Tickets for the showdown are $24 for Terrace Reserved, $34 for Loge Outfield or $44 for Field Outfield Box.

The Force awakens at Miller Park on Saturday, June 11 as the Brewers join The Resistance to battle the newly-minted members of The First Order, the New York Mets. The ballpark will be transformed into a galaxy far, far away with special in-game features and appearances by a number of Star Wars™ characters. Plus, fans who purchase this special Star Wars™ Day ticket package will receive a limited-edition Stormin' Gorman Stormtrooper Bobblehead. Tickets range from $25 to $49 for the battle of the galaxy.

If there’s something strange in your neighborhood, who ya gonna call? Obviously, the Brewers. To celebrate the release of the new Ghostbusters movie, the Brewers will host Ghostbusters Day at Miller Park on Saturday, July 9 as the Brew Crew looks to exterminate the St. Louis Cardinals. Fans who purchase this special Ghostbusters ticket package will receive a limited-edition Brewers quad-bobble featuring four Brewers as Ghostbusters. Sorry, but Slimer will not be included. Tickets are just $46 for Loge Outfield Box seats or $23 for Terrace Reserved.

Break out the neon, overalls and flannel, throw on your Walkman, and head to Miller Park as it transforms into County Stadium for ‘90s Night. On Saturday, July 30, it’s time to party like it’s 1999 as the Brewers will wear their throwback home white uniforms with the blue and green crossed bats logo when they take on the Pittsburgh Pirates. Miller Park will feature a number of tributes throughout the evening, including music from the era, special in-game features and more. Fans who purchase this special ‘90s Night ticket package will also receive a limited-edition ‘90s-themed Will Smith player T-shirt. Tickets for the event are $19 for Terrace Reserved or $39 for Loge Outfield Box, not including inflation!

There’s somethin’ 'bout a trucker hat. Join the Brewers for Country Night at Miller Park on Saturday, August 27 as the Brewers take on the Pirates, then stick around after the game as Platinum-selling country artist Kip Moore takes the stage to perform a free full-length postgame concert. Don’t worry about bringing your own hat as any fan who purchases this special Country Night ticket package will receive a limited-edition Brewers trucker hat. Get your ticket today starting at $24 for a Terrance Reserved seat or $42 for a spot in the Loge Outfield Box.

Tickets are limited and only those who purchase the special theme night ticket package are eligible to receive that night’s promotional item. All theme night tickets must be purchased in advance and can be obtained by calling the Brewers Group Sales Department at 414-902-4777 or by visiting Brewers.com/specialevents. Beginning Saturday, February 27 theme night packages will be subject to demand-based pricing.