Brett Favre's Hometown Cheers on his Enshrinement in Canton 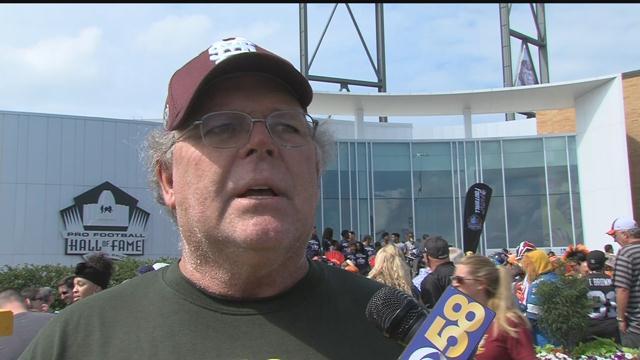 It's Brett Favre's call to the hall and Canton, Ohio looks pretty good in green and gold.

Packers fans are pouring into that city for this weekend's induction of Favre into the Pro Football Hall of Fame.

Canton has been painted green and gold.  Kevin Holden talked with hall of famer, James Lofton.

He is one of several former Packers who have already been immortalized in the Pro Football Hall of Fame.

But as Favre gets ready to join them, he's brought fans from all over the country not just Packers fans, fans of Favre himself, like the owner of a famous bar in Favre's hometown in Mississippi.

Stevie Haas is the owner of The Broke Spoke.

“It's just a small town, a little bigger now than it used to be. It was smaller when I was growing up. Everybody knew everybody. Now there are people and we got a traffic light since then. It's a little bigger town. We enjoyed the Brett Favre years. Everyone enjoyed watching Brett at my bar. We had a packed house every Sunday when Brett was on TV. I had a lot of fun with it. We went to the Super Bowl, thousands of people from Wisconsin,” said Haas.