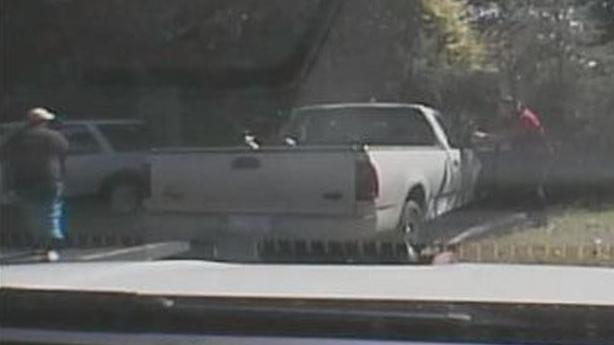 CHARLOTTE, N.C. (AP) and (CBS8 Charlotte) - Charlotte police have released a narrative of what they say happened in the moments leading up to the fatal shooting of Keith Lamont Scott.

The department said in an update released late Saturday that says two plainclothes officers were preparing to arrest someone else when they saw Scott sitting in an SUV, rolling a marijuana blunt.

Officers say they weren't concerned about the drugs until they noticed that Scott had a gun with him, according to police. But after an officer "observed Mr. Scott hold a gun up," police put on marked vests to identify themselves as officers, police added.

The officers say they identified themselves as police and gave Scott orders to drop the gun, which he refused. A uniformed officer tried to use a baton to break out a window on Scott's SUV, the narrative states.

Police say the man got out of the SUV, with the gun, and backed away while ignoring the demands to drop it.

Perceiving Scott's actions as an "imminent physical threat," Officer Brentley Vinson fired his weapon at Scott, according to the statement. Both Vinson and Scott are black.

The report also says forensic examination shows Scott's DNA and fingerprints on the loaded gun retrieved from the scene and that Scott was wearing an ankle holster.

(CBSNEWS) CHARLOTTE, N.C. -- The Charlotte-Mecklenburg police department on Saturday released dashcam and bodycam video of the fatal shooting of Keith Lamont Scott, as well as photos of the gun and possible marijuana blunt found on Scott when he died.

In the dashcam video, Scott can be seen exiting his vehicle before officers start firing. Officers are heard saying “drop the gun, drop the gun!” Scott’s wife, Rakeyia Scott, can also be heard saying “he doens’t have a gun,” which was in the video she released of the shooting.

In the bodycam footage, Scott is shown outside the vehicle as shots are fired.

In a statement, the Charlotte-Mecklenburg Police Department said two plainclothes officers were sitting in an an unmarked car in the parking lot of The Village at College Downs, preparing to serve an arrest warrant when a white SUV pulled up next to them. They observed Scott with what they believed to be a marijuana “blunt,” then saw Scott raise his gun up, the statement said. Officers then left the area to outfit themselves with marked duty vests and equipment that would clearly identify them as police officers, according to the CMPD statement. Upon their return, they identified themselves as officers and warned Scott to drop the weapon, the CMPD said.

A uniformed officer pulled up in a market patrol vehicle and was preparing break the window of Scott’s SUV with a baton when Scott then exited the vehicle, still holding the gun, the CMPD said. Scott backed away from the vehicle, “while continuing to ignore officers’ repeated loud verbal commands to drop the gun,” police said. One of the officers then fired when he allegedly felt Scott to be a threat to their safety, according to the CMPD.

Chief Kerr Putney said the video and other evidence they were releasing would corroborate their account of how things unfolded, including that Keith Lamont Scott was holding a gun when he was shot.

He addressed reporters hours after several hundred demonstrators took to the street for a fifth day and marched around downtown Charlotte.

Putney said that he decided to release the footage after receiving assurances from the State Bureau of Investigation that it would not impact their independent probe of the shooting.

Asked whether he expected the footage to quiet protesters, Putney responded: “The footage itself will not create in anyone’s mind as to what this case represents... the footage only supports the other information” such as forensic evidence and witness statements.

He also said that his officers didn’t break the law but noted that the State Bureau of Investigation is continuing its investigation.

“Officers are absolutely not being charged by me, but again, there’s another investigation ongoing,” he said.

Putney said that Scott was “absolutely in possession of a handgun,” and that officers also saw marijuana in his car - prompting officers to act.

Amid anxiety and unease over the shooting of Scott, demonstrations in Charlotte have gone from violent to peaceful, although demands to see video of the encounter remained at the forefront of discussions for those taking to the streets.

Many of the hundreds massed outside at the Charlotte police department building Saturday afternoon chanted the name “Keith Scott.” The 43-year-old black man was shot to death by a black officer earlier in the week, and police have not released dashcam and body camera video.

Protesters marched Saturday through the streets of a city on edge after Scott’s shooting death. The demonstrations reached a violent crescendo on Wednesday before the National Guard was called in a day later to maintain order.

The next two nights of protests were free of property damage and violence, with organizers stressing a message of peace at the end of the week.

On Saturday, demonstrators chanted, “No tapes, no peace” and raised signs including one reading “Stop Killing The Black People.” Community organizers said on Friday they anticipated that protests would continue in some form until the videos were released.

Charlotte is the latest U.S. city to be shaken by protests and recriminations over the death of a black man at the hands of police, a list that includes Baltimore, Milwaukee, Chicago, New York and Ferguson, Missouri.

Earlier in the week, the Charlotte protests turned violent, with demonstrators attacking reporters and others, setting fires and smashing windows of hotels, office buildings and restaurants.

Forty-four people were arrested after Wednesday’s protests, and one protester who was shot died at a hospital Thursday. City officials said police did not shoot 26-year-old Justin Carr. A suspect was arrested, but police provided few details.

On Twitter, police identified the suspect as Rayquan Borum.

On Thursday, protests were largely peaceful after National Guard members came to the city to help keep order and the mayor imposed a curfew.