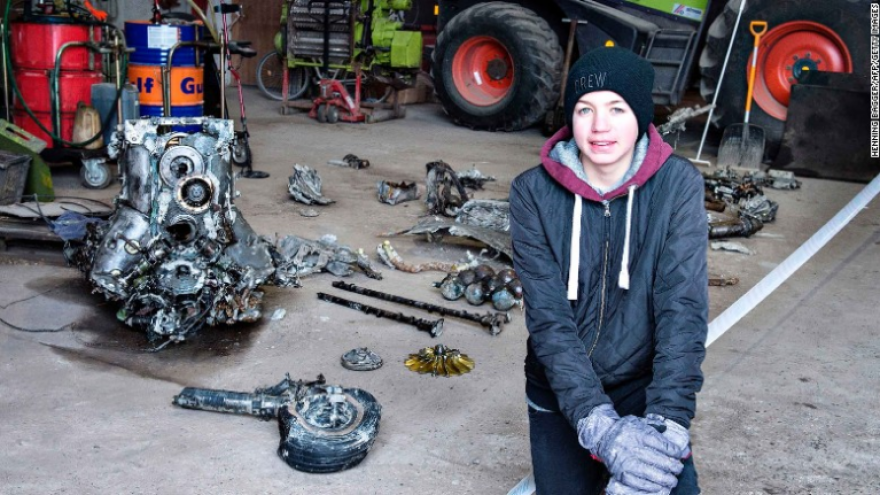 (CNN) A 14-year-old Danish boy doing research for a history class found the wreckage of a German World War II plane with the remains of the pilot in the cockpit.

Daniel Kristiansen and his father, Klaus, discovered what's believed to be a Messerschmitt fighter plane buried in a field on their farm near Birkelse in northern Denmark.

"We went out to the field with a metal detector," Klaus Kristiansen told CNN. "I hoped we might find some old plates or something for Daniel to show in school."

Instead, they found bits of plane debris. So they borrowed an excavator from a neighbor and dug down seven or eight meters.

"At first we were digging up a lot of dirt with metal fragments in it. Then we suddenly came across bones and pieces of clothes," Kristiansen said. "It was like opening a book from yesterday."

Kristiansen remembered being told by his grandfather, who lived on the farm during World War II, that a German plane had crashed there.

"We think it was around November or December 1944," Kristiansen said. He recalled his grandfather once telling him that when the plane crashed, he was making Christmas cookies with Kristiansen's grandmother and his uncle, who was a young boy at the time.

The World War II aircraft was found buried in this field in Northern Jutland.

But he also said his grandfather had told him the German occupying force had removed the plane. "I mainly thought it was just a good story," Kristiansen said.

Karsten Kristensen, superintendent at the North Jutland Police, said authorities believe the aircraft is a Messerschmitt fighter plane. An explosive ordinance team is now working at the site to secure any ammunition or other dangerous materials.

The curator at the Historical Museum of Northern Jutland, which now has the pilot's possessions and the remains of the plane, believes his team will soon be able to confirm the man's identity.

"We found the pilot's papers, and I think we have a name," Torben Sarauw, curator and head of archaeology at the museum, said.

Sarauw believes the pilot came from the training base for German pilots in Aalborg, a nearby city. Along with the pilot's suit, hat and three unused condoms, they also have his wallet, which contained two Danish coins and some food stamps for the canteen at the Aalborg base.

"It's quite a special find," Sarauw said. He believes it's the first time a German plane has been found buried in this way in Denmark.

The debris of the fighter plane is now at a museum of Northern Jutland.

Kristiansen hopes that the pilot's relatives can be found and the remains returned to Germany. "Maybe he can have a proper funeral," he said.

The German Embassy has been informed of the discovery, the police superintendent said.