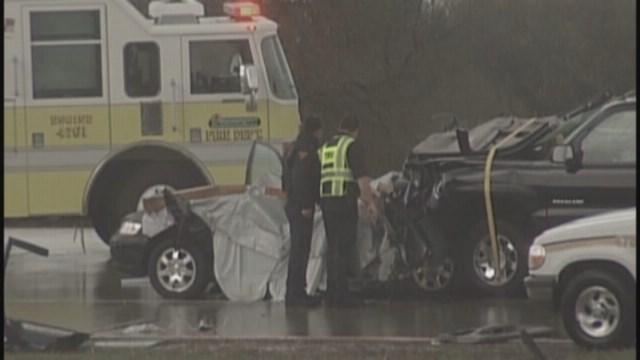 Recent gubernatorial debates brought up the issue of repeat 'operating while intoxicated' offenders. Wisconsin has the most lax drinking laws in the country, a high number of repeat offenders, and deadly consequences for innocent drivers. In a CBS 58 Investigation we looked at how many repeat offenders are getting behind the wheel, and why nothing is being done.

Wisconsin is the only state where the first operating while intoxicated, or OWI, is a ticket. A recent Marquette poll found a majority want it criminalized, including the sheriff who says it's leading to more repeat offenders.

Judy Jenkins lost her 10 year old granddaughter Courtney, daughter Jennifer, and Jennifer's unborn baby. All of them were killed by a doctor, a 3rd time offender.

Jenkins says, \"He was ordered not to drive, his license was revoked, two days later he slammed into the back of our daughter and killed her.\"

\"I'm still befuddled as to why the opportunities aren't seized.\"

Jenkins is not alone, The Wisconsin Department of Transportation's records show Milwaukee county had 3,917 drunk driving crashes with a fatality, injury, or property damage in the last few years.

We combed through re-offenders and found Ronald Robinson, recently arrested for number 8.

Robinson says, \"I don't have a drinking problem, I don't drink everyday, and I don't drink now.\" Court records show in 2010 he not only blew over, but also tested positive for cocaine.

Our reporter asked, \"Do you ever worried getting behind the wheel might hurt someone? \"I don't really drink like that.\"

To get to the bottom of the issue, we sat down with Milwaukee County Sheriff, David Clark.

We asked the sheriff how is it these people have six, seven, eight DUI's, and they're still on the road driving? Clark said,\"It's because they're not being adequately punished which would send a different message.\"

Clark says sentencing for repeat offenders is too broad. A fourth OWI felony, has a sentence range of 6 months to six years, something Clark wants changed.

Sheriff Clark says, \"There are some forces working against us, one of them being the Tavern Association.\"

Ott says, \"I introduced eight bills, four didn't make it to the floor of the assembly.\"

The rules committee can kill a bill by not introducing it to the floor, that committee is currently dominated by Republicans who received the most campaign finance money from the Tavern League last year. Ott's law to close a loophole on an existing law for the car breathalyzer system never passed.

Ott says, \"I don't see why the Tavern League would be opposed to something like that, though they did register as neutral.\"

The Tavern League lobbied neutral on 15 of 36 OWI related bills laws last year. Meaning it doesn't have to disclose who they're influencing behind the scenes.

We called the Tavern League, but they denied our requests for an on camera interview.

As for Jenkins, she still waits for change, \"It's so unfair and it could be anybody's daughter, anybody's grand children and that's what we'd like people to realize.\"

She now holds onto her granddaughter Courtney's last words, \"Imagine a day when nothing can hurt or scare you, where everything impossible is possible.\" Jenkins' hope, is that she won't have to imagine, but will see OWI laws changed.