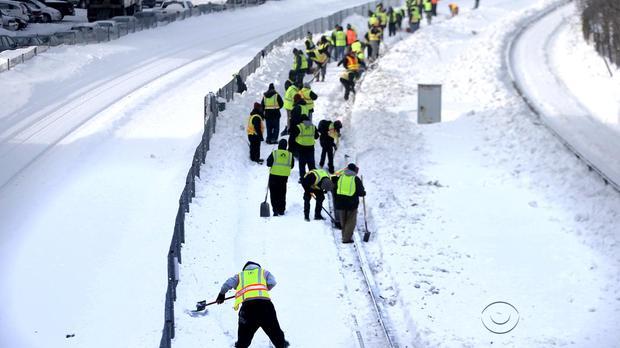 For Boston commuters, nearly 1.5 million of them, this is the new normal -- crammed onto crowded shuttle buses as their trains remain entombed in snow.

Janet McAuliffe's commute of 20 minutes took more than four hours. \"They need to do something, this is just not acceptable.\"

Desperate to clear the tracks, the Boston Transit Authority is using prison inmates and paying union workers to join the shovel brigade. It could be a month before the entire transit system is back on a full schedule.

Every task that was once routine here, has become nearly impossible. North of Boston, a building in flames was right across the street from the local firehouse.

But the hydrants were buried and by the time firefighters dug them out, some by hand, the building was a total loss. \"As you can see, the guys are all iced up, the lines are icing up, the roads are iced up,\" said Chief Greg Gagnon. \"It just compounds the problem.

City inspectors went door to door today urging homeowners to knock down icicles and clear rooftops in danger of collapse. They've gotten snow in 18 of the last 23 days -- more than 95 inches this season.

Even navigating the harbor has become a challenge. Captain Jesse Deery's vessel cut a path for essential deliveries.

\"We have liquid, petroleum gas, liquid natural gas coming into these ports,\" said Deery. \"All those things people need to keep warm during this time of year. So keeping this port open is critical.\"

There is light snow in the forecast over the next two days. Meteorologists here are also keeping a close eye on a system that could bring more snow Saturday into Sunday.