Boston will headline at this year's Wisconsin State Fair 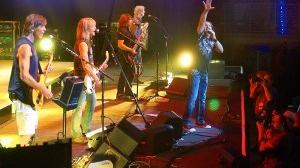 One of the iconic American rock bands will be the opening night headliner for the Wisconsin State Fair.

Boston, now in its fifth decade, is touring again and will play August 6th at 7:30 p.m.

Founding member, the multi-talented Tom Scholz will be there.

Scholz began writing music in 1969, and over the subsequent six years recorded six demos on which he played all of the instruments except the drums. Boston's debut album, “Boston,” released in August of 1976, is still considered one of the best-selling debut albums in U.S. history with more than 17 million copies sold.

A staple on every classic rock fan's playlist, Boston's numerous hits include “More Than a Feeling,” “Peace of Mind,” “Don't Look Back” and “Amanda”. With more than 31 million albums sold to date, Boston has stood the test of time, as evidenced by live audiences that span generations.

Always a crowd-pleaser with their high-energy stage show and remarkable musicianship, Boston prides itself on performing a totally live show without the use of pre-recorded music or technical enhancements, delivering a sound that is faithful to their studio recordings.

Fans can expect to hear all the classics they have grown to love, and will be treated to some new additions to their set list, as well as wild Hammond organ work, soaring harmony guitars and exceptional vocal arrangements.