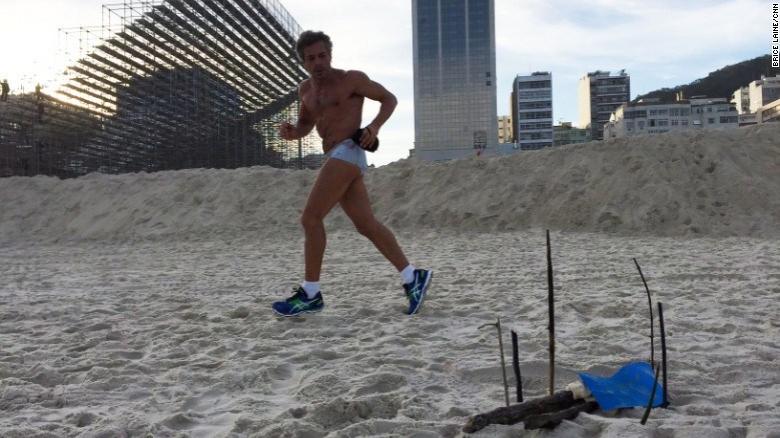 (CNN) With just 36 days to go before the Rio Olympics kick off, the situation in the host city just went from bad to worse.

A beach goer Wednesday discovered mutilated human body parts that had washed up on the shore, right in front of the Olympic Beach Volleyball Arena on Rio's famed Copacabana beach.

A dismembered foot and another body part still unidentified was found, according to Andre Luiz, an officer of the Military Police. Police believe the victim was a woman or young adult.

Although the circumstances surrounding the person's death are unknown, it is another embarrassing blow to the host country -- already reeling from financial problems, a mishap-prone Olympic torch and an outbreak of the mosquito-borne Zika virus.

Two days before the gruesome body parts discovery, the acting governor of the state of Rio de Janeiro warned that the Games could be a "big failure" because the state is out of money.

"I am optimistic about the games, but I have to show the reality. We can make a great Olympics, but if some steps are not taken, it can be a big failure," Francisco Dornelles told Brazilian newspaper O Globo.

Some of the Olympic Games costs are funded by the city of Rio de Janeiro, but the burden also falls on the Rio de Janeiro state government, and it is in bad shape.

The state declared an official emergency and requested a federal bailout earlier this month but it hasn't received the money. Dornelles warned of a breakdown in essential public services and said without the emergency funds, the police force could only cover its costs to the end of the week.

Police demonstrate against the government for arrears in their salary payments on June 27, 2016 in Rio de Janeiro, Brazil.

The frustration over unpaid wages for members of law enforcement boiled over in several protests. That same day, several people held up a banner at the airport that said: "Welcome to hell. Police and firefighters don't get paid, whoever comes to Rio de Janeiro will not be safe."

Similar messages have popped up over the city, such as one graffiti on a flyover that warned about the lack of functioning hospitals.

If that refrain sounds familiar, that's because one of Brazil's most successful soccer players Rivaldo Ferreira also warned people earlier to stay away.

The day prior, a man tried to snuff out the Olympic torch by throwing a bucket of water at it.

Marcelino Mateus Silva Proença, 27, missed the torch altogether hitting only the torch bearer and the security guards around it.

He was arrested, and released, and since then, has been posting about the incident on Facebook which he said was a dare from his friends.

"I have the torch, but don't have education, health, security, quality of life..." he said on Monday.

An even bigger fuss was created over another Olympic torch incident, when a jaguar called Juma that was being exhibited with the torch relay escaped from her handlers and was shot by a soldier.

Rio 2016's organizing committee quickly proffered up an apology, saying they had "made a mistake" putting a wild animal near the torch and guaranteed no more situations like this will occur during the Games.

Can they pull it off?

That's all in a week's work for Rio's Olympics organizers.

There are other issues of concern of course, like the untreated sewage in the waters which athletes complained have made them break out in disease. The U.S. Olympic rowing team is taking extra precautions and will be wearing seamless antimicrobial unisuits to compete, while the German sailing team has been practicing trying to sail in trash-coated waters.

On a country-wide level, Brazil is grappling with the Zika virus outbreak causing one Olympian to freeze his sperm, a doping scandal in which Brazil's only testing lab was suspended, a crime wave, and political upheaval involving the country's highest figures.

So is Rio ready? Time will tell.