Blue Angels back in Milwaukee for Air & Water show 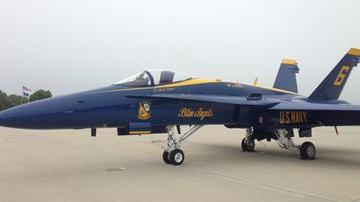 MILWAUKEE -- The Blue Angels are back...that's music to many people's ears for the 2014 Air and Water show.  After the government decided to stop letting Blue Angels fly last year, they are back touring.

The group is back in Milwaukee for this weekend's air and water show.  The media got a up close look Thursday morning at the 128th Air Refueling Wing.

These pilots build up to the season, just like an athlete would.  They train five to six days a week and are flying about 15 times per week.

The Blue Angels perform in about 35 cities per year so it's not something people can see all the time.

Lieutenant Mark Tedrow is in Milwaukee for the first time.  The Pittsburgh native said all the cities they've been to are excited to have the Blue Angels back.

\"Last year we were put on the bench for a year so to speak,\" Tedrow said.  \"We apply to this team thinking that we are going to be out flying air shows and so when we weren't able to do that, you know, it was a little bit of a letdown. Now that we're back, back in the swing of things it's great because we're doing what we're supposed to do and what we apply to this team to do.\"

Lt. Tedrow also explained what it's like to fly one of the Blue Angel planes.

\"I try to equate it to the most violent rollercoaster you could ever imagine.\"

The Blue Angels are the Air & Water Show headliner, performing around 3:00 pm Saturday and Sunday.