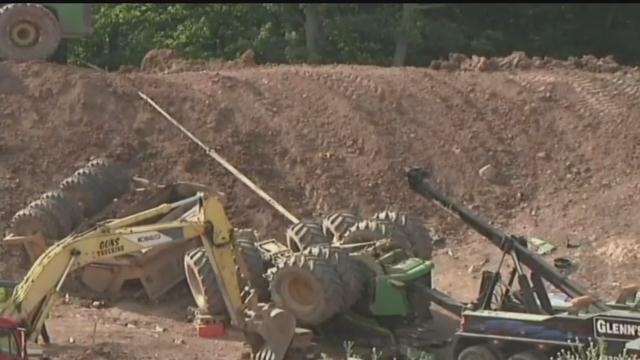 If you've ever wondered about the value of donating blood, you need to hear Jason Pansier's story.He's a Brown County firefighter who almost died after a farming accident, but blood donations, and lots of them, played a critical role in saving his life.

More than a month after that accident Jason Pansier is still recovering at Froedtert. His family says hes getting better everyday but knows he is alive thanks to generous gifts from others.

When a 40 thousand pound tractor overturned on Pansier, he thought his time was up.

\"We were building a big manure pit and he was pulling a big earth mover behind a big tractor and he came down a hill and I guess the clay was sticky and it stuck to the tractor and rolled the tractor over,\" said his father, Roy Pansier.

It was a two hour rescue mission led by volunteer fire fighters.

Jason, known as Jake to his family, was losing blood but managed to stay conscious the whole time, even refusing pain medication.

\"He knew that mentally he had to be there and he was still reporting to us what to do while he was under there,\" said his sister Holly Schlag.

Once the jaws of life freed him-the struggle to survive continued..

The Blood Center says Jason received an astronomical amount of blood. A massive transfusion is 10-15 units of blood; Jason has received more than 300.

His family says he wouldn't be here today if it weren't for people like Jan Cegielski, who routinely donates blood, in fact he did so Sunday for the 127th time.

\"It's a lot of dedication but then when I see a family like this one that's here today and I know that they needed it it just makes me happy that I'm doing it,\" said Cegielski.

A gift thats given a new lease on life to  Pansier.

There will be a blood drive at State Fair Park this Wednesday and Thursday from 7AM to 7PM. You can also donate your blood specifically to Pansier. His  sisters say, if you do, you'll get a handwritten thank you card.