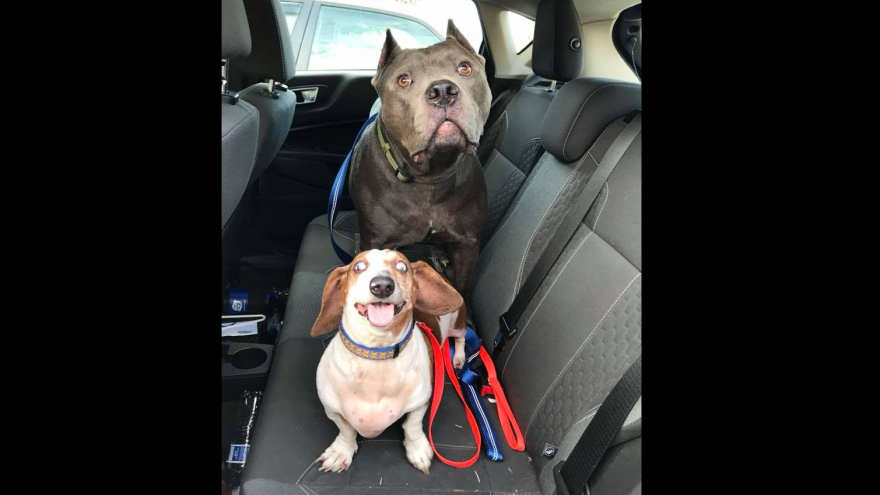 (CBS NEWS) -- A blind dachshund named O.J. and his pit bull sidekick, Dozer, stole the hearts of millions earlier this year. The unlikely duo were inseparable when they turned up at Richmond Animal Care and Control in Virginia. The two dogs were brought to RACC because their owner became homeless and could no longer take care of them.

O.J. lost his sight and has a habit of running into things. Blue Dozer, or just Dozer for short, operates like his guide dog.

Since he can't see, O.J. follows Dozer everywhere. Their owner knew they had to stay together no matter what. "And her plea to us was -- as we're all like crying behind the front desk -- if they could please stay together," Peters said. "We put them on Facebook. We got a lot of coverage because they are ridiculously cute."

In fact, the photo of the pair went viral in May and they were both adopted by someone who promised to keep them together. But just a few days later O.J. was placed in another shelter. Peters was distraught. "We promised that we would keep them together and their life would be great," she said.

Peters brought O.J. back to RACC and convinced the adopter to return Dozer, too. The two dogs remained at RACC and their future was uncertain. That is, until someone else took an interest in the quirky duo.

According to CBS News, A Richmond family adopted O.J. and Dozer on Friday evening. The two dogs have been on a wild ride together, but now they have left animal control for their forever home.

"These dogs have taken us on a roller coaster ride of emotion and turmoil and yet remained steadfast in their love for each other and their ability to adapt and overcome vexing circumstances," RACC wrote on Facebook.