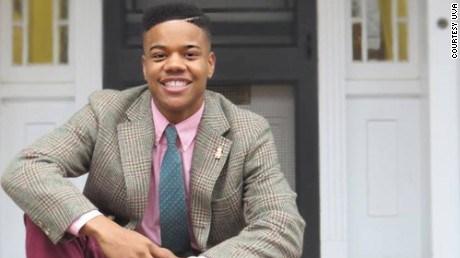 Martese Johnson is lying face-down on the pavement, blood flowing from his forehead. He was injured when Virginia alcohol control agents took him to the ground, trying to arrest him for public intoxication and obstruction of justice.

An agent can be heard telling the student to stop fighting.

The video does not show the moments leading up to the arrest. But many say it's the latest example of excessive force by officers against a black man.

Denied entry at a bar

The incident started when Johnson, 20, was turned away from a bar during St. Patrick's Day celebrations.

Virginia Alcohol Beverage Control agents approached him and decided to \"further detain the individual based on their observations and further questioning,\" the agency said.

\"In the course of an arrest being made, the arrested individual sustained injuries.\"

\"Just before handcuffing him, police took Martese to the ground, striking his head on the pavement and causing him to bleed profusely from the gash on his head,\" attorney Daniel Watkins said. He said Johnson's head wound required 10 stitches.

\"For his face to literally be bashed in by concrete -- there's no words to describe that,\" a protester told CNN affiliate WTVR.

Johnson himself took the microphone, calling for peace.

\"Regardless of your personal opinions and the way you feel about subjects ... please respect everyone here,\" he said. \"We are one community. We deserve to respect each other, especially in times like this.\"

UVA President Teresa Sullivan said she was disturbed by images of the arrest and contacted the governor's office to ask for the investigation.

\"I felt it in my stomach,\" she told WTVR. \"Just seeing the blood run down that young man's face, I wanted to know what happened.\"

\"Today, we are reminded of the gruesome reality that we are not immune to injustice; as University students, we are not impervious to the brutality that has reeled on news cycles around the country,\" the group said Wednesday.

\"We have marched and shouted that we are Trayvon Martin and Michael Brown, but the proximity of this morning's brutality to a member of our community has deepened that wound.\"

The special agents involved in the arrest will be restricted to administrative duties, pending the results of the investigation, the Virginia ABC said.

Johnson is a third-year student double-majoring in Italian and media studies. He has no criminal record, according to his attorney, and holds a variety of leadership positions on campus.

\"As evidenced by both his academic and extracurricular achievements, Martese is a smart young man with a bright future,\" Watkins said. \"He is absolutely devastated by yesterday's events. Currently, we are preparing to investigate and defend this matter vigorously.\"

Johnson will appear in court on March 26 for misdemeanor charges of obstruction of justice without force and public intoxication, CNN affiliate WWBT reported.

In the meantime, UVA's president urged anyone who witnessed the arrest to contact authorities.

\"We have not yet clarified all of the details surrounding this event,\" Sullivan said, \"but we are seeking to do so as quickly as possible.\"

CNN's Mary Moloney and Patrick Cornell contributed to this report.