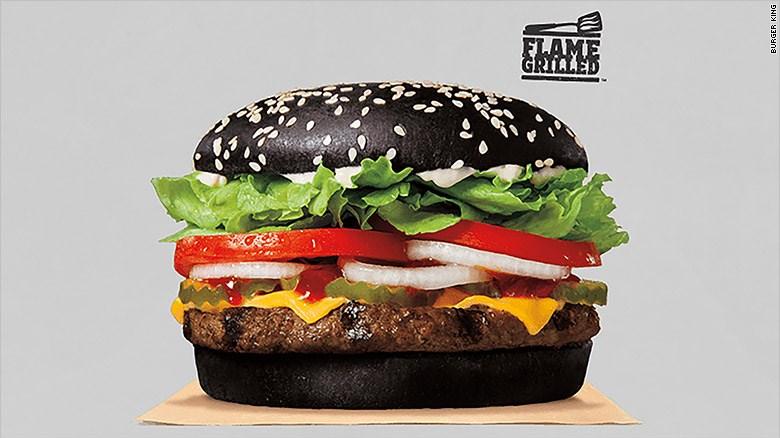 Burger King recently introduced its Halloween Whopper -- the restaurant's signature hamburger is sporting a black bun during October. But the sandwich packs a spooky surprise: Eating it can turn your poop green.

Medical experts say this colorful side effect is nothing to worry about.

"Sometimes stool color is very important, and sometimes we can get worried inappropriately about the color of stool," Dr. Ian Lustbader, a clinical associate professor of medicine and a gastroenterologist at New York University's Langone Medical Center, told Live Science.

So what's making Burger King customers' post-meal stools so colorful? Most likely, it's the food coloring in the bun, Lustbader said. Food coloring is not always completely absorbed by the intestines during digestion, and the dye that isn't absorbed can seep into food material that's sitting in the gut, turning it different colors, he said. [5 Things Your Poop Says About Your Health]

This color combination makes the bun look black -- until it gets to your intestines, that is. Once the food is inside your belly, your gut absorbs most food colorings in the bun, Lustbader said. But if enough of the blue food coloring remains floating around in your intestine, it can mix with the yellow-green bile that is also in your intestine (bile is a fluid, produced in the liver, that aids in digestion of fats).

The yellowish bile and blue food coloring will most likely combine to make a green liquid, which then turns the food material in your gut an unnatural shade of emerald, Lustbader said. It's also possible that both the blue and yellow food colorings used to color the bun are poorly absorbed by the intestine, and that these two ingredients combine to turn poop green.

While green poop is certainly weird-looking, it's not something you need to fret about -- artificial colorings aren't necessarily bad for your digestive health, Lustbader said. However, he also said that he recommends moderation in consuming foods loaded with these artificial ingredients.

"Things like food coloring, done for cosmetic reasons and not the nutritional value of the product, do we really need that?" said Lustbader, who added that people concerned with the Halloween Whopper's effect on their stool color could just forgo the bun altogether.

"In general, most stool color varies day to day based on what you're eating. It can have flecks [of different colors]. It can be dark brown or light brown or a little yellow," he said. Eating lots of spinach can also turn your poop green, and having a beet salad might turn both your urine and your stool an alarming shade of red.

However, certain changes in poop can be a sign of serious health issues, he said. People who notice black, tarry or pale poop should call their doctors, Lustbader said.

The normal, brown color you're used to seeing during bathroom breaks is caused by the breakdown of bile and red blood cells in the intestine. Certain health conditions, like cancer or hepatitis, can prevent bile from entering the intestine, resulting in pale or gray stools. And black stools can be a sign of bleeding in the gastrointestinal tract, he added.

In the meantime, if you're really interested in the green poop phenomenon that Burger King's Halloween Whopper has stirred up, you can search the hashtag #greenpoop on Facebook and Twitter. But before you do, be advised that you might see pictures of other people's oddly colored stools.