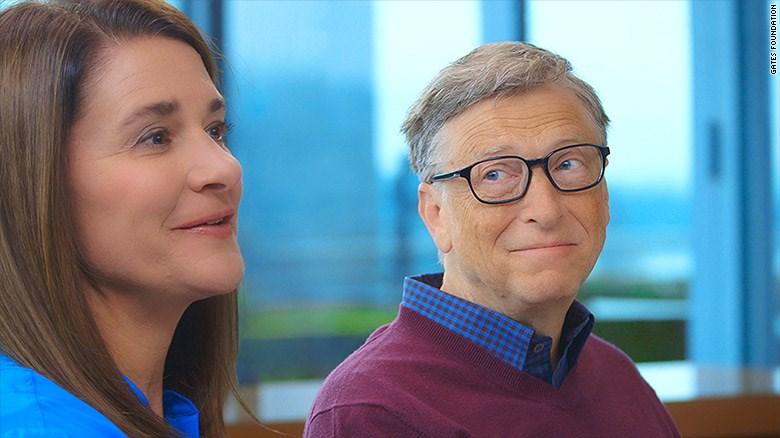 (CNN MONEY) The world's richest man can spend his money on anything, but he says he stays away from buying clothes or jewelry for himself.

"I do like to buy nice things for my wife," Bill Gates wrote on Reddit on Tuesday. After all, he said marrying her is the best decision of his life.

The billionaire, philanthropist and Microsoft (MSFT, Tech30) founder took an hour out of his day to host his fourth AMA -- a mix of very serious and sometimes silly questions.

He was asked about everything from artificial intelligence and the Apple encryption debate, to education and his fastest time on Minesweeper.

Here are a few of the most interesting questions and answers, shortened for brevity.

Would you consider marrying Melinda to be one of the top three decisions of your life?

You are correct! I would put it at the top. Deciding to work on software was a good decision but that just crept up on me rather than being some choice.

What's your take on the recent FBI/Apple situation? What would you do if you were Apple?

Maybe [Apple] could propose an overall plan for striking the balance between government being able to know things in some cases and having safeguards to make sure those powers are confined to appropriate cases. There is no avoiding this debate, and they could contribute to how the balance should be struck.

Some people have come out in favor of regulating artificial intelligence. What is your stance?

I haven't seen any concrete proposal on how you would do the regulation. I think it is worth discussing because I share the view of Musk and Hawking that when a few people control a platform with extreme intelligence, it creates dangers in terms of power and eventually control.

What's a technological advancement that you think we were actually better off without?

I am concerned about biological tools that could be used by a bioterrorist. However, the same tools can be used for good things as well.

Some people think hoverboards were bad because they caught on fire. I never got to try one.

What's your fastest time in expert Minesweeper without editing the .ini file?

Sometimes you just get very lucky based on the configuration. I forget the exact time but I think I had a time below 10 when it was just right.