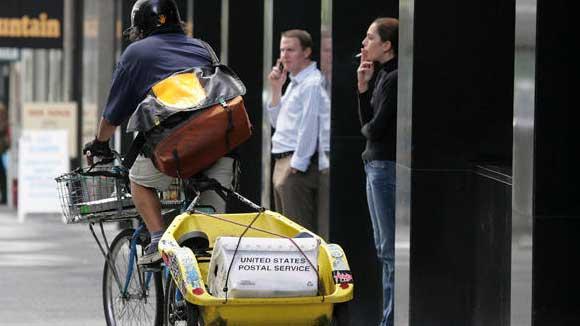 The birth of the baby to a homeless woman took place at the busy corner of Market and Sixth streets on Monday, according to SFGate.com, quoting witnesses and a fire department spokeswoman.

Witness Ayrron Comini told SFGate that the messenger was "a hell of a hero."

According to published accounts, the unidentified woman gave birth and then pushed the child beneath a bus shelter. The bike messenger came upon the scene and while others watched jumped into action.

"Nobody else stepped up, but he did," Comini told SFGate. "He literally took the shirt off his back and took care of that baby."

An unidentified witness recorded cell phone video of the woman giving birth.KRON-TV broadcast the graphic video, which shows a person assisting the woman, but it's not clear if the person in the video is the messenger.

The fire department shortly arrived and took over. The messenger left the scene without disclosing his name.

San Francisco Fire Department spokeswoman Mindy Talmadge told the website the mother and child were in good condition when they were transported to San Francisco General Hospital.