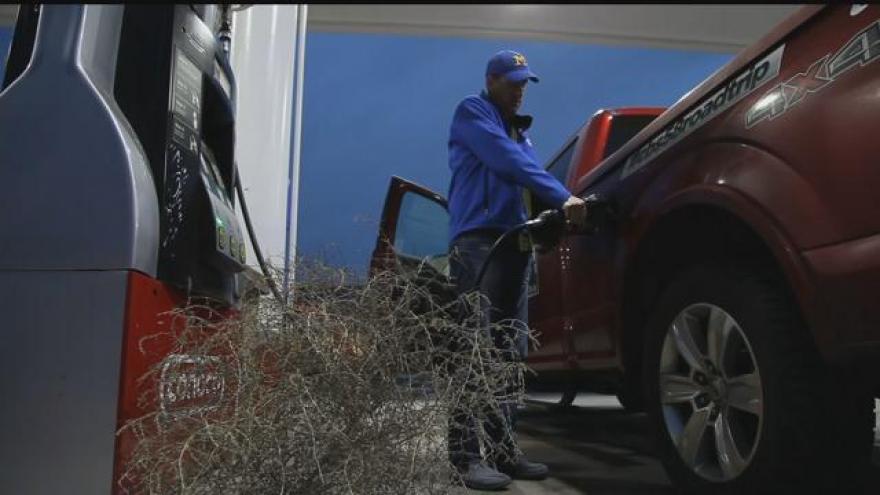 Saturday was the busiest driving day of the CBS 58 Big Road Trip and also the biggest weather day on the trip so far. We started out in a mild Denver with temperatures in the 60s, but quickly made our way up the Rocky Mountains.

This was my first time driving through the Rockies and they were what I expected them to be and more – gorgeous! I was seriously taken aback by the sheer beauty especially with a little layer of snow. Speaking of snow, we were slightly prepared to see some snow on our trip through the Rockies, but didn’t really know what we were in for. This is an area of the country that sees feet of snow with multiple snow storms throughout the winter.

On our way up Interstate 70 traffic signs were flashing with messages of tire chains and traction laws. Not knowing what that meant, we weren’t really sure if we needed tire chains or a special permit to drive through the Rockies. After doing a little research we learned that the tire law usually only applies to commercial vehicles and only once a winter are private cars and trucks required to put them on.

We made it up to 11,000 feet to Eisenhower Tunnel the highest point on I-70 and the highest vehicle tunnel in the world! We did experience a little snow and rain and a little icy mix on either side of the tunnel before traveling down the mountains. Temperatures at the top dropped to around 30 before climbing back to the 50s as we left Colorado into Utah.

Utah was beautiful as well, but very desolate. Towns and cities were few and far between. The crew stopped in Green River, Utah to eat and was very glad we did because the next stop for services including bathrooms, restaurants, phones, etc was over 100 miles and 90 minutes of driving away. On a side note, the speed limit of 80 mph in Utah does make driving go faster!

Driving was pretty smooth in Western Colorado and Utah until we reached central Utah and more mountains and the snow started to fall. That snow stayed with us for about three hours before we reached SW Utah where things were a bit warmer and the snow ended.

We then continued our long travel day southwest into Nevada towards Las Vegas. While on our way we realized we made a slight miscalculation and would travel through Arizona for 50 miles meaning we will travel through a total of nine states instead of eight on the CBS 58 Big Road Trip. So seven states down and two to go! We didn’t arrive in Vegas until around midnight local time or around 2:00 AM central time. Total travel time for the day was about 14 hours!

Luckily after such a demanding day, Sunday is a bit easier. We will stay in Vegas all day talking about betting on the Super Bowl.

And the CBS 58 Road Trip Rolls on.