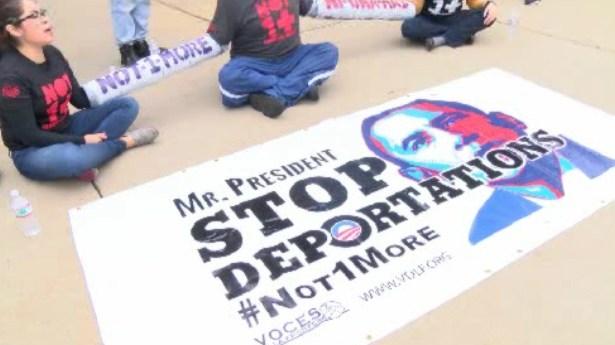 The number of immigrant deportations on President Barack Obama's watch fell to an all-time low this past year, according to a new border patrol report.

As border crossings continue to rise, deportations dropped by about 14 percent in the year that ended Sept. 30 compared to the year before, according to a U.S. Immigration and Customs Enforcement draft report first obtained by the L.A. Times and published Thursday. Nearly 316,000 people were removed from the U.S.

A slowdown of deportations might help Obama score higher the Latino community, which overwhelmingly voted for Obama over his GOP challengers, but have been critical of the president's deportation policies, some even calling him a \"Deporter in Chief.\"

Over the course of his presidency, Obama's administration has deported about 2 million people -- putting him on track to have deported more illegal immigrants than any other President in history.

His popularity in the Latino community has inched up since he issued an executive order last month. The action would limit deportations for about 5 million people.

While this policy is favored by most Americans, 56% said they opposed Obama's use of executive action.

House Republicans have approved a measure to challenge Obama's executive order -- and these new deportation numbers could also add fuel to the fire for Congressional Republicans, who say that less deportations will lead to more illegal immigration.

\"We essentially tell citizens of other countries, 'If you come here, you can stay -- don't worry, we won't deport you,'\" said Rep. Michael McCaul (R-Texas), chairman of the House Homeland Security Committee, in a statement to the L.A. Times. \"The reality on the ground is that unless you commit multiple crimes, the chances of your being removed from this country are close to zero.\"

Eighty-five percent of immigrants deported during the year from within the country had a criminal conviction, according to the report.

In a statement to CNN, Gillian Christensen, the agency's press secretary, said that I.C.E.'s effort \"prioritizes the removal of convicted criminals and recent border entrants.\"

That squares with Obama's dedication to focus on \"felons, not families,\" as he said in his executive action speech, honing in on criminal offenses instead of more broad sweeping deportation policies.

Most deported immigrants were sent back to their home country: Mexico.

Notably, higher than usual numbers of immigrants crossing the border in the past year came from countries other than Mexico, including Guatemala, Honduras and El Salvador, the report reveals, potentially making the process to obtain travel documents and book flights to distant locations more complicated and more expensive.