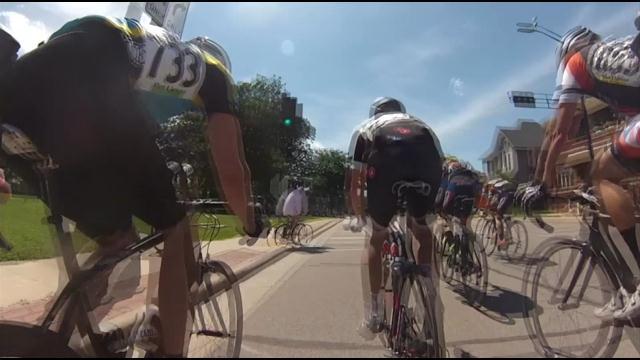 It's a collision on the bike course that looks pretty scary the first time seeing the video.

CBS 58 spoke with bicyclist Brian Davis who recorded the wreck on his go-pro.

There were bikers competing, when a spectator turned right, and crashed into them.

\"The guy was on his bike,\" said Davis. \"Not paying attention. Headphones in. He didn't glance back at all at the street. He just rode into our group. Took out maybe 15/20 guys.\"

Brian Davis was one of them.

\"We had only about two seconds to figure out what was going to happen,\" said Davis. \"All of us are yelling no-no no-no no and he just came barreling in because he couldn't hear us, and we all smacked right into him.\"

More than 6-thousand cyclists from around the world compete in the 11-day “Tour of America's Dairyland” race. The competitors are used to accidents, just not ones that involve spectators.

\"Accidents definitely happen,\" said Jack Hirt. \"We try to secure the course as much as we can. We can't have a body and volunteer at every inch of the course. There are gaps and fences that people can jump out and it's a very unfortunate situation. I'm just glad nobody was seriously injured.\"

Bicyclist Brian Davis says the spectator was just as surprised as the racers.

\"He was confused looking at us like it's our fault we're having a bike race today,\" said Davis. \"Sounded like he said I take this way home everyday. You would pay attention to something being a little out of the norm for the day. That did not happen.\"

CBS 58 spotted the spectator in the area.

He declined to speak with CBS 58 on camera, but claims he didn't see the riders when he made that right turn.