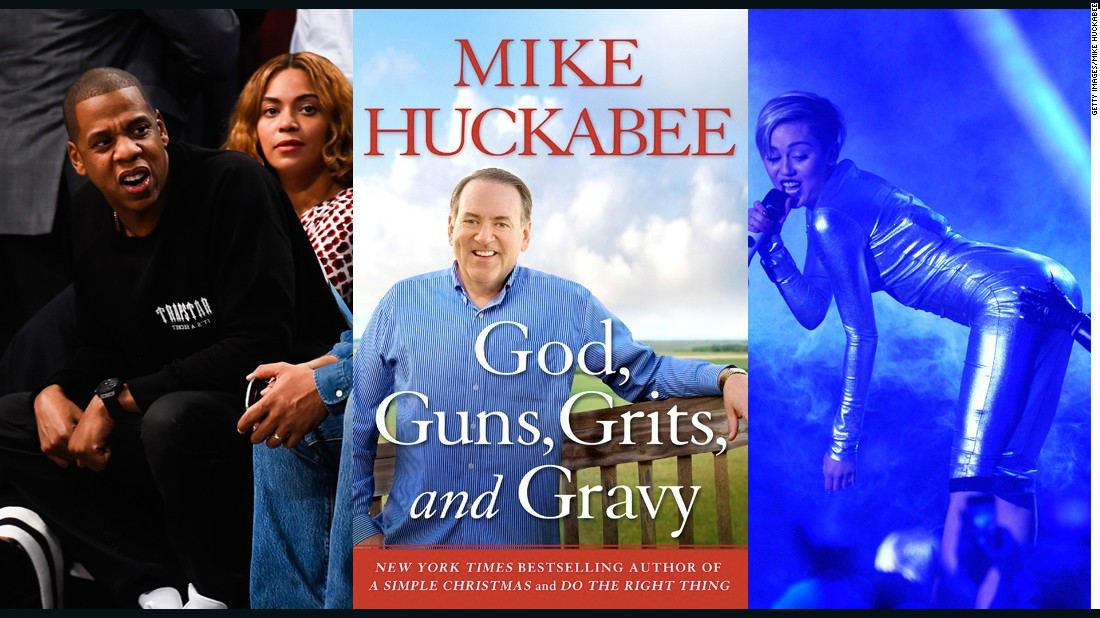 WASHINGTON (CNN) -- Mike Huckabee is releasing a new book as the former Arkansas governor prepares for a potential 2016 presidential run, and it covers everything --- from reality television to government surveillance (in a curiously-named chapter \"Bend over and take it like a prisoner!\"). We read \"God, Guns, Grits and Gravy\" and rounded up all the info you might not know about the former Arkansas governor:

1. He's got a surprisingly thorough familiarity with pop culture — and very little patience for it.

Huckabee thinks Miley Cyrus is a bad dancer but Beyonce is a good one.

He describes Cyrus' 2013 MTV Video Music Awards performance as one in which she \"contorted her barely-clad, barely legal-age body in a disgustingly pornographic performance that showed just about everything she had --- except talent --- and focused national attention on a new term, 'twerking,' which describes a vulgar movement better saved for a stripper pole than prime-time television.\"

Beyonce, however, is \"incredibly talented ... has an exceptional set of pipes\" and \"is a terrific dancer --- without the explicit moves best left for the privacy of her bedroom.\" But he didn't like her dance with husband Jay Z during the 2014 Grammy Awards to their song \"Drunk in Love.\"

\"Jay-Z is a very shrewd businessman, but I wonder: Does it occur to him that he is arguably crossing the line from husband to pimp by exploiting his wife as a sex object?\" Huckabee wrote of the performance.

He's also not a big fan of Rihanna's style.

\"I've seen dusty pickup truck windshields that were less see-through than the mesh 'dress' Rihanna recently 'wore' on the red carpet at a fashion show,\" he noted.

(The Council of Fashion Designers of America, which awarded her its 2014 Fashion Icon Award --- an event that prompted the dress --- would probably disagree.)

And don't even get him started on reality television, which takes up an entire chapter of his book. Huckabee appears to be familiar with The Real World, Survivor and the Bachelorette --- and has problems with all of them.

Later in the book, Huckabee compares a government without checks and balances to \"Ferris Bueller's Day Off on steroids (and boozed up).\"

\"[The Founding Fathers] knew that the sheer power of [the government] is an intoxicant and that most of the people who enter government will be like sixteen-year-old boys with keys to the liquor cabinet whose parents are gone for the weekend,\" he writes.

2. His views on gay marriage are more nuanced than you'd think.

Huckabee recounts in the book that he got his introduction to the idea of homosexuality from a Boy Scout troop leader who was molesting members of his troop.

\"To be clear, I am not equating all gay men with pedophiles; I'm just relating how this particular person was my introduction to the then-unfathomable concept of same-sex attraction,\" he notes.

Describing his outlook as \"God-centered and not man-centered,\" Huckabee offers up some questions on homosexuality:

\"Are such variations normal? Which ones? Are there any limits on what is an acceptable attraction? If so, what is the objective basis for those limits, and who gets to draw that line?\"

He later adds: \"Is Lady Gaga correct when she sings about being 'Born this Way'?\"

And yet, he declares: \"The claim that same-sex marriage is destroying society is actually greatly overstated.\"

\"Christians who themselves abandoned the primacy of lifelong marriage to follow the divorce and remarriage customs of a secular society have as much to answer for as do those who militantly push to redefine marriage,\" he adds.

\"I think of myself as a pretty sensitive guy. I'm not callous or cold. I've been known to cry at movies, particularly when a dog dies or a kid gets hurt. That's why I couldn't even see Marley & Me and had to sit in the theater until everyone left before I exited after sitting through My Dog Skip.\"

4. He's not particularly pleased with conservative outside groups

Huckabee faced opposition from the Club for Growth during his 2008 run for president, and apparently still holds a grudge. He writes that \"groups like Club for Growth are basically 'pay for play,'\" and says big donors can write checks to the Club and \"it will do the dirty work for you.\"

\"It's a coward's way to fight,\" Huckabee writes.

Huckabee goes on to compare the battle for conservative purity forged by some of those outside groups to, well, mass-shooters and suicide bombers.

\"I really don't think [Fort Hood shooter] Nidal Hasan is the role model the GOP wants to emulate. We should leave the kind of Sunni/Shiite fights for the real jihadists. The goal of conservatives should be to build up America -- not blow up the Republican Party.\"

5. He's got a lotta love for some of his potential 2016 opponents — but disdain for others.

Huckabee praises and defends a handful of potential 2016 opponents. He gushes over Mitt Romney, calling him \"a good man with impeccable integrity in his personal and business life,\" praises Rick Perry for recruiting businesses to come to Texas during his time as governor, and defends his work with former Florida Gov. Jeb Bush on Common Core.

He makes no mention of Sens. Marco Rubio, Ted Cruz or Rand Paul, but does implicitly knock the prospect that they all might run for president while serving in the Senate.

During his last run, he says, \"I saw others who were sitting members of Congress or the Senate, who would still receive the paycheck plus all their benefits that I helped pay for, and yet never had to show up for work to get the check!\" he writes.

6. His verdict on the Obamas' parenting skills is still out.

Huckabee says that he's \"generally admired the parenting instincts of the First Couple,\" but is appalled that they let their daughters listen to Jay-Z and Beyonce's \"Drunk in Love.\"

\"With the First Lady so concerned about making sure her daughters' bellies don't ingest unhealthy food, how can she let their brains ingest obnoxious and toxic mental poison in the form of song lyrics?\"

\"I suppose I'm lucky to be highly allergic to tobacco smoke, because I've never smoked a single cigarette and never wanted to.\"