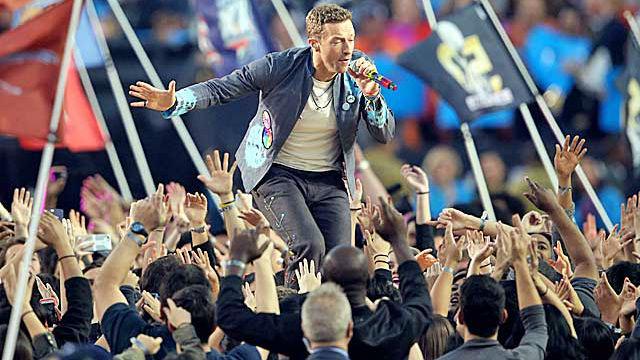 (CBSSports) With the Broncos leading the Panthers 13-7 at 30 minutes of play, Coldplay kicked off theSuper Bowl 50 halftime show with some fireworks and their track Yellow, which transitioned into Viva La Vida.

With the stage adorned with all kinds of flowers and surrounded by thousands of fans, Coldplay welcomed some violinists onto the stage as well. For Paradise, Coldplay was joined by saxophonists dressed in gold and orange tuxedo jackets. They transitioned toAdventure of a Lifetime and people started to notice Chris Martin's strange pants (I was more confused by his shoes).

Coldplay was then joined on stage by Bruno Mars (and Mark Ronson), who was wearing an ensemble entirely made of black leather (and massive gold chains) for Uptown Funk.

Once that was over, we got BEYONCE, also clad in black leather, performing her new trackFormation (the video dropped on Saturday) alongside a drumline and a crew of similarly-dressed dancers.

Formation transitioned into a musical interlude where Bey and Bruno were both pulling off some incredible dance moves, before the duo was joined by Martin for another rendition ofUptown Funk.

To the tune of Coldplay's Clocks, we were then shown clips of halftime shows of Super Bowls past. Flags, flowers, dancers, Bruno, Bey, clapping, waving hands, and the crowd spelling out "BELIEVE IN LOVE" in the background ended the show.

Of course, all anybody over on the ole Twitter really cared about was Beyonce, so let's just pick out some excited tweets about how amazing she looked/how good her performance was because why not?

Coldplay and Bruno were pretty good, too. But this was definitely Beyonce's night. Beyonce now. Beyonce forever.