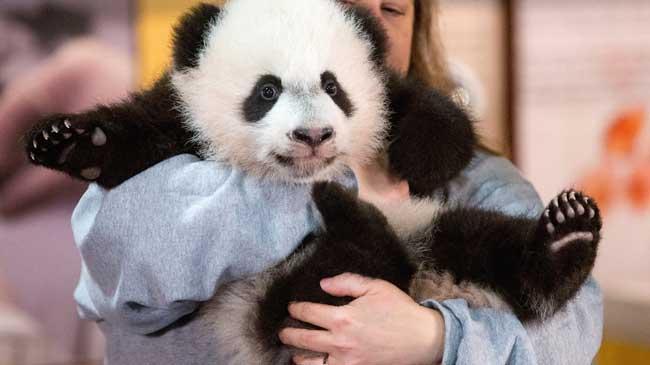 WASHINGTON, D.C. -- The new star of the National Zoo, Bei Bei the baby panda, made his first media appearance today.

Getting introduced to the media at four months old is something usually reserved for royalty, but that's exactly what Bei Bei is -- the panda prince of cute.

Millions of panda lovers have watched him grow up on the National Zoo's panda cam -- from birth when he was completely helpless, to where he is today, which is just mostly helpless.

Doctors say he's in perfect health and give much of the credit to mom who endlessly plays with him, carries him over rocks, slides him across the floor, and nuzzles him to sleep.

"Right now he is entirely dependent on her. He's not eating any solid food. She's nursing him -- that's where he gets all of his nutrients, everything comes from mom right now," said Brandie Smith who is in charge of animal care at the zoo.

Today, mom -- or Mei Xiang -- spent much of her time outside, leaving Bei Bei in the media glare with his keeper, Juan Rodriguez -- known to Bei Bei's adoring fans as the luckiest man in the world.

"Pretty much every day" people tell Rodriguez that they want his job. "Being able to work with these guys -- it just puts a smile on your face -- I mean you just cant get enough of it."

The public will get to see Bei Bei in person starting next month. Today, after most of the media throng left, Mei Xiang finally returned, and those remaining were treated to the soft embrace of a mother's love.