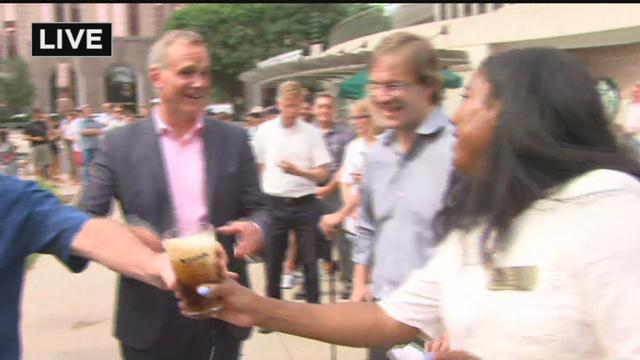 Milwaukee County's Traveling Beer Garden has been recognized by CNN wire service as one of the country's nine "prime spots for a sampling of sausage and a few steins of beer."

So imagine the excitement when they tapped the keg at the first ever in Milwaukee's Red Arrow Park?

The CBS 58 News at 4 covered the event live where  County Supervisor Marcelia Nicholson had some challenges, but refused to give up on the task
to get the beer flowing.

The day's special features were root-beer floats and gluten-free beer.

Souvenir cups can be reused at any of the Traveling Beer Garden stops.

But that's not all. Wine and food items were also available.

Of course, families are welcome to pack their own picnic lunches or suppers and non-alcoholic beverages.

License restrictions prohibit the carry-in of any alcohol. Grilling is not allowed at the beer garden site or the immediate surrounding area.

All Traveling Beer Garden stops are wheelchair accessible and have ample restroom and parking facilities nearby.

Through the partnership, Sprecher donated more than $40,000 in 2015 alone for improvements to parks on the tour.