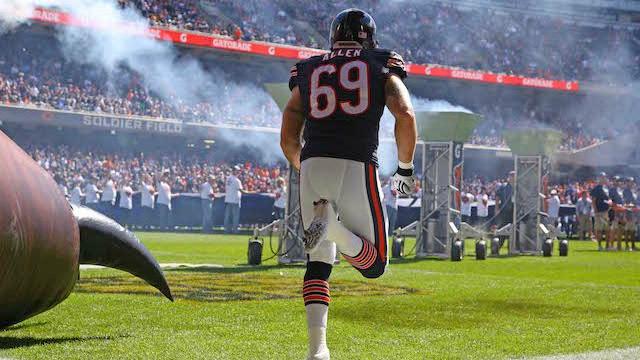 (CBSSports) NFL trades don't happen often during the regular season, but that didn't keep the Bearsand Panthers from working one out on Monday.

The trade means Allen will be back in a 4-3 defense after trying to adjust to the 3-4 defense that the Bears had been playing.

The Panthers were almost forced to make a move after losing defensive end Charles Johnson to a hamstring injury during Carolina's 27-22 win over New Orleans on Sunday. The injury was so bad that the Panthers have already announced that Johnson won't be playing in Week 4.

The team hopes to have Johnson back in the lineup after a Week 5 bye.

The Panthers defense has been banged up this season with Luke Kuechly also missing two games due to a concussion.

Now that he's back in a 4-3 defense, Allen will likely be able to help the Panthers almost immediately. The 33-year linebacker ranks ninth all-time with 134 career sacks.

You can bet the four-time Pro Bowler is a big fan of the trade, not only does he get to play in a defense he's comfortable in, but he gets to make the move from the 0-3 Bears to the 3-0 Panthers.

The four-time Pro Bowler played in a total of 18 games with the Bears after signing a four-year, $32 million deal in March 2014 that included $15.5 million in guaranteed money.