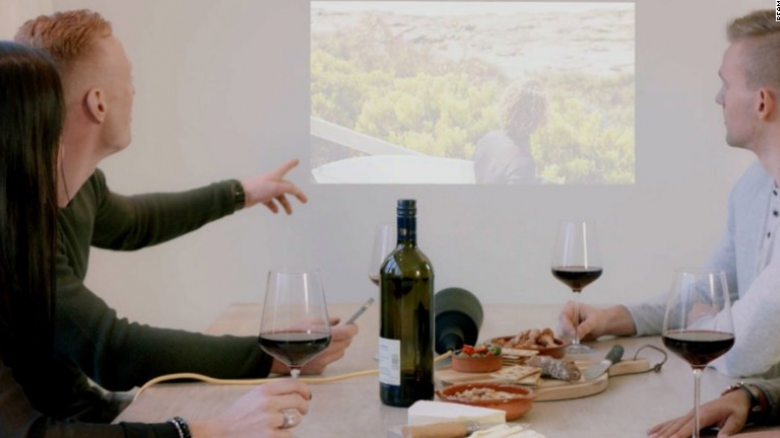 (CNN) As consumers continue to shift toward streaming content, Dutch startup Beam Labs is offering up a creative approach that takes the screen out of the equation all together.

At the IFA 2016 gadget show in Berlin this week, the company is showing off Beam, a smart projector packed into a light bulb. It cleverly projects video from streaming apps such as Netflix(NFLX, Tech30) and YouTube onto just about any surface.

Beam is powered by a small computer that connects with iOS and Android devices, so you can select what you'd like to stream from your tablet or phone. The light bulb can be propped up on a table or inserted into the company's portable stand (sold separately) before you angle it onto a surface, from the ceiling above your bed to the side of the garage in your backyard.

The light bulb comes with a built-in speaker, so you can hear what you're steaming and can connect to other external speakers, too.

"It can be used to replace a TV, but Beam is designed to integrate video into other places inside the home like above the dinner table," CEO & co-founder Don Molenaar told CNNMoney. "We see a lot of social uses, too, like sharing pictures and video friends on walls using AirPlay or Miracast."

The product started as a project on crowdfunding platform Kickstarter, where it raised more than $700,000.

During a recent product demo, we were reminded how we felt when we first used Amazon's voice-controlled Echo speaker: it's a product you never knew you wanted until you see how useful it is in practice.

It's also possible to connect the light bulb to other features on your smartphone, such as the alarm clock and calendar.

"A lot of our users use it as an alarm clock.... [it wakes] them up in the morning by showing them their agendas and the weather forecast -- projected in their bedrooms," Molenaar said.