Attorneys for a man suspected of kidnapping a Wisconsin teen and killing her parents are calling it "a very tragic situation."

Patterson faces kidnapping and homicide charges and has a court appearance Monday. Glynn and Jones say they're relying on "the integrity of our judicial system" to treat him fairly.

An aunt says a Wisconsin teenager who was found alive this week almost three months after vanishing from her home had "a pretty good night sleep" on her first night back with family.

Thirteen-year-old Jayme Closs was found Thursday afternoon. A 21-year-old man is suspected of killing her parents in October at their home in Barron, Wisconsin, then kidnapping the teen.

One aunt, Jennifer Smith, posted on Facebook Saturday that it was great to know Jayme was next to her all night and that it was a "great feeling to have her home." Smith wrote that the family faces a long road to recover from the ordeal.

Another aunt, Sue Naiberg Allard, posted that Jayme got "the most awaited hug ever" when she returned home.

Officials did recover a gun in the home Jayme was kept in that is consistent with the weapon used to murder Jayme's parents. The gun, described as a shotgun, needs to be tested to confirm it is the murder weapon. The shotgun was also used to break into the Closs home.

The suspect, Jake Thomas Patterson, made efforts to conceal his identity and evidence from law enforcement including shaving his head to not leave any hair.

Authorities do not believe Patterson ever had contact with anyone in the Closs family, including Jayme. They do not believe at this time that there was a social media connection between Patterson and Jayme Closs.

When the suspect was found authorities believe he was out searching for Jayme who had escaped. Officials do not believe he was home when Jayme escaped.

Jayme's condition and possible injuries have not been released but she is talking and communicated with investigators.

Patterson is expected in court Monday afternoon which is when more details will be released.

BARRON, Wis. (AP) -- Ownership of a remote cabin where a Wisconsin teenager was apparently held during a nearly 3-month disappearance passed to a credit union soon after the girl's abduction.

Records show that defendant Jake Thomas Patterson's father transferred the title of the cabin near Gordon to Superior Choice Credit Union on Oct. 23, eight days after the Oct. 15 attack at the Closs family's home near Barron, which is about 60 miles (100 kilometers) south of Gordon. It was appraised at $79,300.

Jake Patterson was arrested Thursday after authorities say 13-year-old Jayme Closs managed to escape from the cabin and approach a neighbor, who sought help. Authorities believe he killed Jayme's parents to abduct her. He is jailed on homicide and kidnapping charges. Jail records don't list an attorney for him.

BARRON, Wis. (AP) -- The company that employed the slain parents of a Wisconsin teen who was kidnapped says the man accused in the attack worked at the plant for one day nearly three years ago.

Steve Lykken, president of the Jennie-O Turkey Store in Barren, issued a statement Friday saying 21-year-old Jake Patterson was hired one day but quit the next, explaining that he was moving away from the area.

An obituary for James and Denise Closs says they worked at the turkey processing plant for 27 years.

Lykken says the company and the Hormel Foods family are "overjoyed at the news of Jayme's safe return."

Here is a full statement from Lykken:

“On behalf of the entire Jennie-O and Hormel Foods family, we are overjoyed at the news of Jayme's safe return. Barron is an incredibly strong community and one that never lost hope in her safe return. We are still mourning the loss of longtime Jennie-O family members Jim and Denise, but our entire team is celebrating with the community, and the world, that Jayme has been found.

We want to give special recognition to law enforcement officials for their dedicated and tireless efforts in finding Jayme, especially Sheriff Fitzgerald and his team. Right before the holiday, our team joined with the community to light a Tree of Hope for Jayme. At that ceremony we sent wish lanterns into the air. Yesterday, our wishes were answered.”

Nearly three years ago, Jake Patterson was hired one day but quit the next, citing that he was moving from the area. He has not been employed with Jennie-O since then.”

Authorities say Jayme escaped from a cabin in the town of Gordon on Thursday and they arrested Patterson on homicide and kidnapping charges.

BARRON, Wis. (AP) -- A woman who called 911 to report that a missing 13-year-old Wisconsin girl had been found says the girl told her that the man arrested in the case "killed my parents and took me."

Kristin Kasinskas told The Associated Press on Friday that Jayme Closs said she didn't know why she was targeted.

A 21-year-old Gordon man, Jake Thomas Patterson, was arrested Thursday on homicide and kidnapping charges. Authorities say Jayme managed to escape from a cabin in Gordon where Patterson was holding her and that she encountered a woman walking her dog, who knocked on Kasinskas' door.

Kasinskas says she doesn't really know Patterson even though he lives three doors down from her. She says she taught him middle school science but only remembers that he was quiet.

Kasinskas says she didn't see Patterson during the months that Jayme was missing.

The FBI has thanked all their law enforcement partners and the media.

We thank all of our law enforcement partners, including the citizens of the community and the media for keeping the information of 13 year old Jayme Closs in the public which helped bring her safely home today. pic.twitter.com/XUEfFtA3jg

A fundraiser has also been set up on Facebook at the approval of the family. The fundraising goal is $10,000. Click here to donate.

Around 4:30 p.m. the Douglas County 911 received a call after a woman walking her dog was approached by a woman who identified herself as Jayme Closs. The dog walker went to a neighbor, identified as Kristin Kasinskas, who called 911.

Douglas Counties Deputies responded en mass and took Jayme into their custody. Shortly after a car matching the suspect's description given to deputies by Jayme was found and the suspect was arrested.

Jayme Closs was taken to a hospital in the Superior area where she was held overnight for observation.

The suspect has been identified as 21-year-old Gordon man Jake Thomas Patterson. Patterson is currently being held on two counts of intentional homicide for the murder of Jayme's parents and one count of kidnapping. Official charges are expected next week. 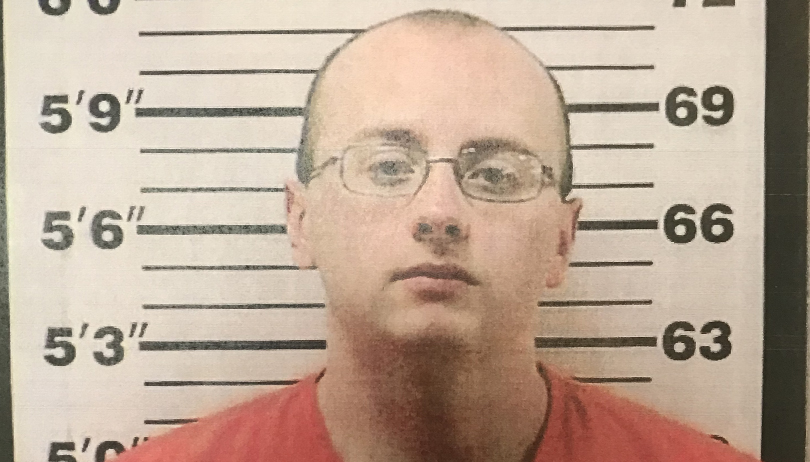 According to the Barron County Sheriff, Patterson did not have contact with Jayme's parents and Jayme was the target of the entire incident. The current investigative theory is that Patterson went to the home with the intention of kidnapping Jayme Closs and did what he need to do to achieve that goal. The Sheriff said Patterson was "proactive in hiding his identity."

Investigators received over 3,500 tips in the 88 days that Jayme Closs was missing. The home she was being held in was in a remote area of Gordon, Wisconsin. 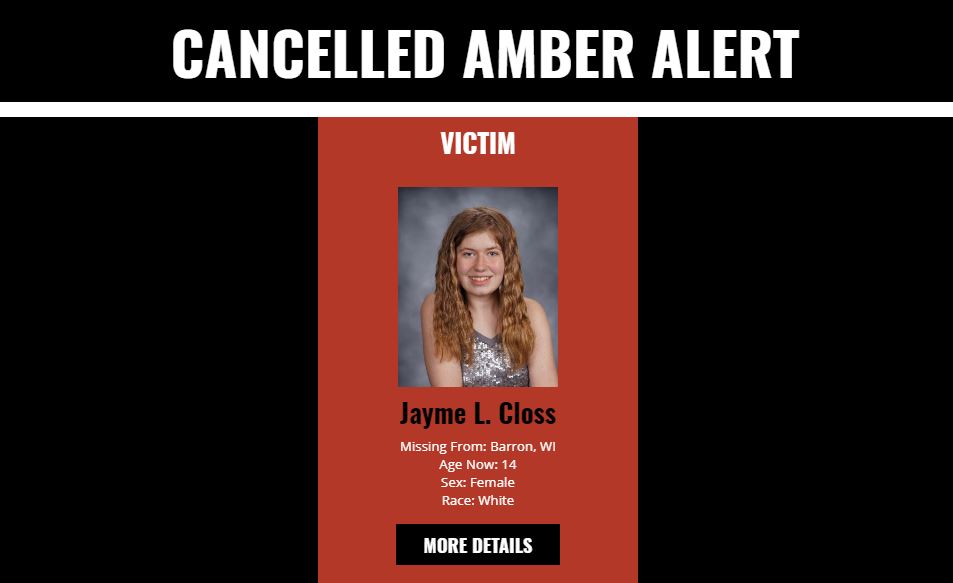 The School District Superintendent hopes to have a celebration one day. Counselors and psychologists are available at school.

Sheriff Fitzgerald says search warrants are being conducted Thursday morning in the Gordon area. Jayme Closs is expected to be returned to the Barron area later Friday morning or Friday afternoon.

Authorities said they are not looking for any other suspects.

A press conference with more information is expected at 4 p.m. CBS 58 will carry it live on air and online.

BARRON, Wis. (AP) -- A woman who helped a Wisconsin girl who'd been missing for three months following her parents' deaths says the girl told her she'd been held against her will.

Kristin Kasinskas says she took 13-year-old Jayme Closs into her home after the girl and a woman she'd approached for help came to her door Thursday afternoon in the small town of Gordon.

Kasinskas tells NBC's "Today Show" that Jayme talked about being locked up or hidden when the person had to leave, but that the girl didn't detail how she got away.

Jayme was reported missing on Oct. 15, after her parents were found fatally shot in their home near Barron, about an hour's drive south of Gordon.

BARRON, Wis. (AP) -- The grandfather of a Wisconsin girl who went missing after her parents were killed in October says he received a call late Thursday that he'd been praying for, informing him his granddaughter had been found alive.

Robert Naiberg told The Associated Press on Friday that his daughter called him with the news that 13-year-old Jayme Closs had escaped her captor near the small town of Gordon, about an hour's drive from where her family lived.

Naiberg says Jayme reported that she'd been held by "a guy in the woods" but was able to escape.

Witnesses say Jayme approached a woman walking her dog Thursday, asking for help. The woman took her to a nearby home owned by Peter Kasinskas.

Kasinskas tells Minnesota Public Radio News that Jayme told him she'd been abducted, that her parents had been murdered and that she left a nearby house after she'd been left alone.

Investigators confirm a suspect is in custody but say no other details would be released until a Friday news conference.

WISCONSIN -- A Wisconsin couple is describing the dramatic moments when a neighbor pounded on their door to say she had stumbled across Jayme Closs, a 13-year-old girl who had been missing nearly three months.

Kristin and Peter Kasinskas say their neighbor had a skinny, dirty girl with matted hair standing next to her. The neighbor shouted, "This is Jayme Closs! Call 911!"

Peter Kasinskas tells the Minneapolis Star Tribune that Jayme was quiet and showed little emotion. He says she told them she didn't know where she was or anything about Gordon, the small town near where she was found.

Jayme's parents were killed in October at the family's home near Barron and Jayme went missing. The place where she was found is a little more than an hour's drive to the north.

Authorities say they have a suspect in custody and planned to release more information Friday.

According to the Douglas County Sheriff's Office, Jayme Closs was located alive in the Town of Gordon at 4:43 p.m. on Thursday.

The Sheriff's Department says a suspect was taken into custody roughly 10 minutes later in the same town Jayme was found in.

Jayme was allegedly found after a citizen phoned in information. 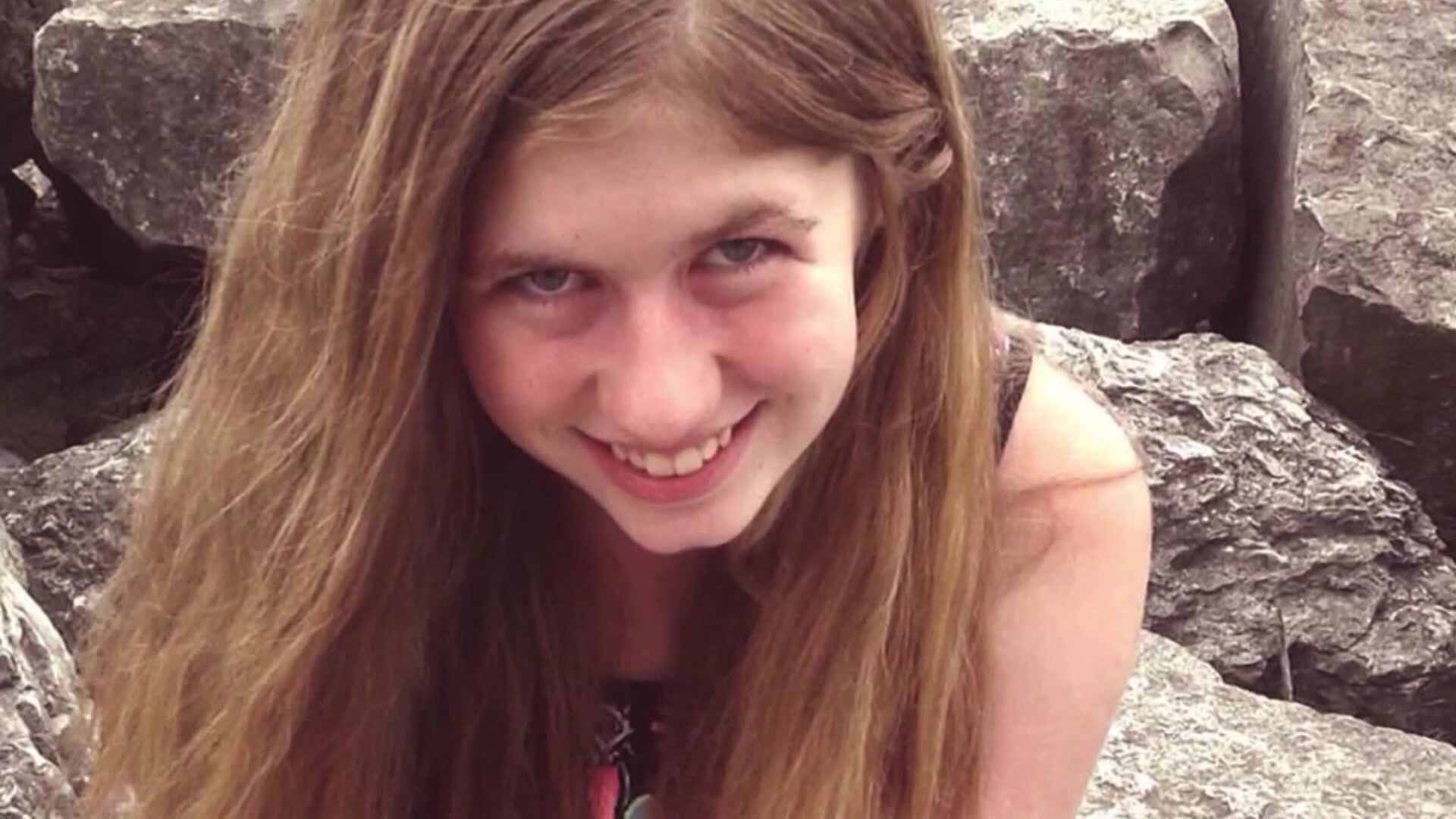 Jayme Closs had been missing since her parents, James and Denise Closs, were found fatally shot in their home on Oct. 15.

CBS Minnesota spoke with Jayme's aunt Sue on Thursday evening who said her niece was currently at the hospital.

“There was rumors earlier today, and I prayed and prayed and they come to not be true,” Jayme’s aunt Sue told WCCO. “And I just shut myself totally down. I thought today was going to be the day, and then I find out two hours later that she’s found and I just cannot believe this.” 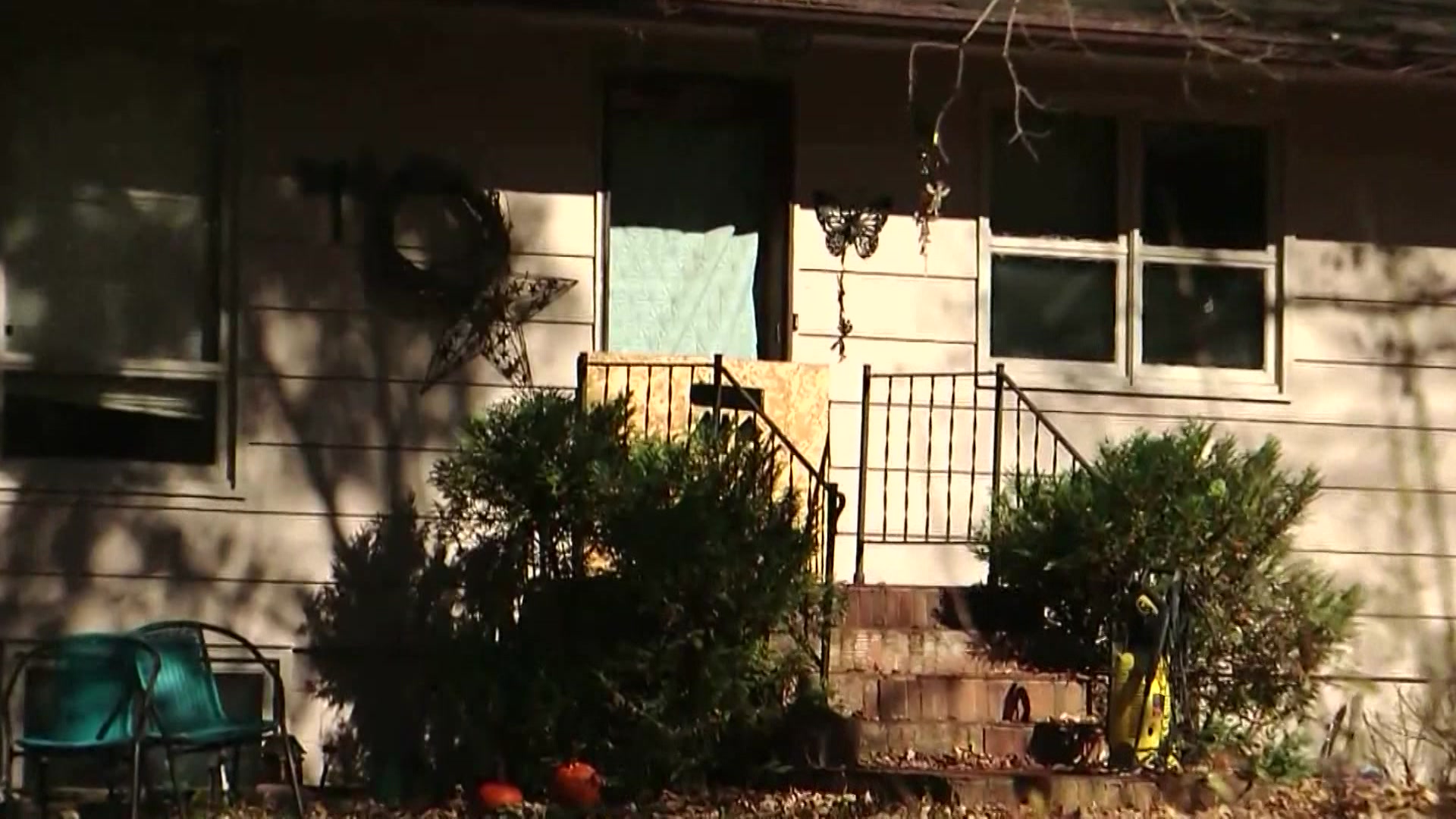 This comes after thousands of tips and tons of speculation over where the teen was.

The Baron County Sheriff said tonight, the department gets to fulfill the promise they made to bring Jayme home.

A press conference will be held Friday at 10 a.m.