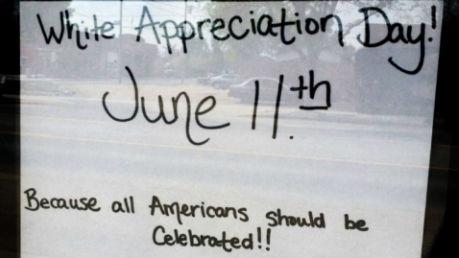 (CNN)The owner of a Colorado barbecue restaurant who drew criticism for offering a \"White Appreciation Day\" discount says his idea is to celebrate Americans of all races, not just one.

What started off as a joke about how there's no holiday that celebrates \"the white community\" has been misinterpreted as a racially charged promotion, said Edgar Antillon, co-owner of Rubbin' Buttz BBQ and Country Cafe in Milliken, Colorado.

\"We are an amazing culture here in the U.S. We're a melting pot,\" Antillon told CNN. \"But we should include white people in that, too.\"

A sign posted in the restaurant's window announcing \"White Appreciation Day\" on June 11 reads, \"Because all Americans should be celebrated.\"

In an interview with KUSA-TV this week, Antillon said it was unlikely that he would offer a discount to other racial groups. On Saturday, however, Antillon told CNN that any American -- white, black, Asian or Hispanic -- who visits Rubbin' Buttz on June 11 will be offered the same 10% discount.

Antillon said he understands the need for heritage months to celebrate groups overlooked in history. As a Mexican-American, he said has experienced racism firsthand.

But, that doesn't mean any race deserves to \"segregated\" to a month-long celebration, he said.

News of the 10% discount drew mixed reviews as it spread across the country this week, prompting the restaurant to address the controversy on its Facebook page.

\"Although we've had overwhelming support for it, there are a few who are filled with hate and/or misunderstanding. People full of hate and negativity want your attention, don't give it to them. Stay happy!\" the statement said.

Some responding to this message dismissed it as a publicity stunt, while others condemned it as a racist promotion that downplays the history of racial inequality in the United States.

\"Yeah, like the rest of the year doesn't already belong to the White people!\" one commenter said.

Others thanked Rubbin' Buttz owners for acknowledging that \"whites deserve the same amount of appreciation as any other race.\"

Antillon apologized to the community of Milliken and to his restaurant's former owners who, like him, have been targets of threatening messages, he said.

\"Our intention was not to put white people on a pedestal,\" Antillon said. \"It was merely to fight fire with fire.\"