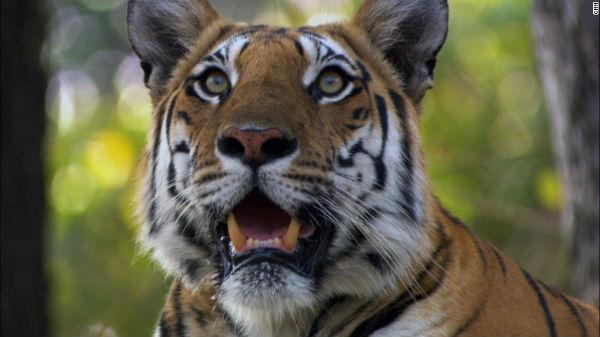 More tigers are kept as pets in the U.S. than roam free in the wild, campaigners say, as they call for tough new laws to ban the practice on International Tiger Day.

While just 3,000 tigers inhabit forests across Asia and Russia, it's estimated that as many as 5,000 are kept captive in small cages in U.S. backyards.

\"The main reason for all of these cats in backyards and basements and garages across America is that it's legal for people to have their picture taken with a cute little tiger cub or lion cub,\" Carole Baskin, founder and CEO of Big Cat Rescue, explains to CNN.

\"And those cubs are only cute and manageable until they're about 12 weeks old. By the time they're 13 weeks old, the people who are using them for these photo booths find that it costs $10,000 a year to take care of them, so they give them away. They sell them,\" says Baskin.

And that cost is just for food and veterinary costs -- not the maintenance of highly secure cages and facilities.

The International Fund for Animal Welfare (IFAW), in conjunction with other animal protection organizations such as Big Cat Rescue, are calling on Congress to pass The Big Cats and Public Safety Protection Act, to end private possession and breeding of various big cats.

Leigh Henry, Senior Policy Advisor at World Wildlife Fund (WWF), tells CNN: \"The Act has failed to gain sufficient support to be moved through the legislative process in the past,\" although she hopes that will change.

\"It is critical that the U.S. get a better handle on this population, and that we demonstrate conservation leadership to influence China, with an even larger captive tiger population, to take similar actions,\" she adds.

The dangers of keeping big cats as pets is evident in figures which show that, between 1990 and 2015, eight people were killed and 54 injured by domestic big cats in the U.S.

Tim Harrison, director of Outreach for Animals, which also rescues unwanted exotic pets, tells CNN: \"I do not know of an owner, and I used to own big cats, that has not been attacked or scared by a mature big cat. If they tell you any different, they are lying. That living in fantasy land ultimately costs the owner and the cat their lives.\"

He says, captive tigers, for example, become larger than their owners and are often forced to spend their adult lives in cages.

\"The tiger doesn't understand why he now is a prisoner when he used to sleep with you... Some owners surgically alter the cats which makes it hard to place at many sanctuaries because a declawed cat with rounded canines and not fed correctly cannot protect itself from other cats.\"

A retired police officer, Harrison adds: \"...it is always the police and fire [department] that have to handle these calls. There is no training academy that teaches them to handle this type of incident.\"

A rescuer of bobcats, also known as wildcats, since she was 17 years old, Baskin of Big Cat Rescue started receiving calls asking her to take in tigers and lions by people who couldn't handle them any more. Living on five acres of land in Florida, in 1992 she bought 67 more acres to try to meet the ever-growing demand.

After the law was passed, Baskin found that the number of calls she was getting from people desperate to offload their exotic pets dropped from around 312 to approximately 160.

However, legal loopholes were soon discovered. \"...it only applied to people who were buying them as pets. So anybody can get a USDA (U.S. Department of Agriculture) license, which is considered a commercial permit, for 40 bucks. Then your tiger is not a pet, it's a commercial enterprise. That's how people get around state bans.\"

There's another serious problem other than profiteering from these animals -- it's suspected that some of the tigers may end up in the illegal wildlife trade for bones and parts, suggested to be worth hundreds of millions of dollars.

\"[We] estimated there were conservatively around 200 of these cubs being bred and used each year. But there are no way near that many cubs ending up in need of rescue.\"

\"...We really believe that they are ending up in the illegal trade. The problem is, that's just such a hard thing to prove. It's a tight network of these bad guys that work together and they are so careful not to let it be known what they're doing outside of their own industry.\"

When Baskin has accompanied the authorities on big cat raids and taken in the animals, she has usually found them in deplorable conditions.

\"The last raid that we did was in August last year and that was the first time we rescued a cat that was in a decent condition. We've been doing this for 22 years.\"

'Keeping big cats should be allowed'

The tiger she took in belonged to Timothy Gress, 52, from Augusta, Georgia, who was relocating the exotic animals of his sanctuary, Augusta Conservation Education, which he began about 22 years ago while working full time as an electrician. Home to a lynx, cougar, leopards, ligers (tiger and lion hybrid), several big lions, a gray wolf and a black bear, Gress needed to wind down the operation as it had become too big to handle.

Using his reliable contacts to successfully house all of his animals within six months, Big Cat Rescue took in his last animal -- a female tiger called Kali, who was born to a mother who was abandoned in unsanitary conditions by a breeder 15 years ago.

Gress argues that keeping an exotic pet should be allowed -- as long as the owners know what they're in for. He advocates training programs for anyone who wants to share their living space with a wild animal. \"If they're trained properly and you're doing it for the right reasons, then you can successfully do things that makes their lives better,\" he tells CNN.

\"That's ultimately what we're after. They didn't ask to be in a cage in the United States. But they're here. And it's our job to make them comfortable.\"

In fact, he says his animals were living very contently. \"They had covered enclosures, they had swimming pools, they had fresh meat and water daily.\"

And he speaks passionately and at length about how to take care of such predators.

Before entering a tiger cage, you have to greet the tiger, or \"chuff\" -- the sound, he says, tigers make when they come across each other in the wild. \" ...you don't turn your back, you move in a circular motion in a corner of the pen. If they're startled, then that means when you go inside, you're probably not going to have a good experience,\" he laughs.

Breeders are 'part of the problem'

Gress maintains that he never bred, sold or commercially exploited his animals. \"Anybody that breeds is not part of the solution. They're part of the problem,\" he says.

However, many wildlife activists wish to discourage both ownership and breeding of wild cats. The proposed Big Cats and Public Safety Protection Act would ban both, if it gains enough political support.

Gress argues: \"There are always going to be tigers in captivity in the U.S. You're never going to stop it. There are too many that they don't even know exist.\"

International Tiger Day falls annually on July 29, aimed to raise awareness of the endangered animal. Baskin believes the proposed bill could be the wild tiger's redeemer.

\"If we ban private possession, and people get caught with wild tiger parts, a premium product, they have to prove where they came from. The tiger in the wild has a chance if we can ban the private possession.\"

Although she says she carries out her duty without grudge, she wishes it wasn't required. \"All of us who are in the sanctuary industry want to put ourselves out of business.

\"We don't want there to be a need for a place to have to rescue big cats from horrible situations. We want that whole industry, that whole practice, people using them, to end.\"