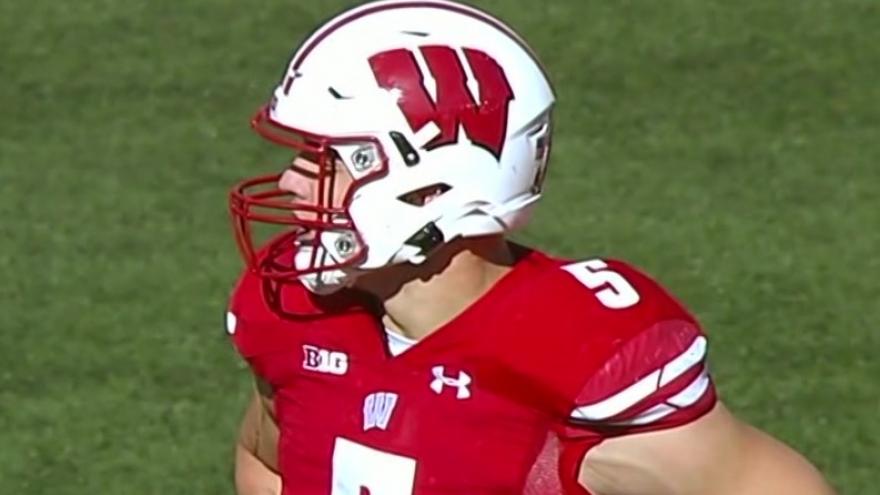 MADISON, Wis. (CBS 58) -- As the 2022 NFL Draft nears, many are hopeful several Wisconsin Badgers will get a life-changing phone call. In an interview with CBS 58, Badgers linebacker Leo Chenal talked about how his college experiences have prepared him for the next level as well as his draft process.

Chenal reflected on his time with the Badgers and how he fell in love with Wisconsin right away.

"I kind of felt like I got lucky because my first offer was a dream come true for me," said Chenal. "Looking back on it, it was definitely a really great decision for me."

CBS 58 recently spoke with former Badger Vince Biegel and how he mentioned that the University of Wisconsin "instills great values in its players."

Chenal had a similar response.

"It definitely teaches us mental toughness and brotherhood and good values," said Chenal.

He also went on to praise the team by bringing up players who developed into stars at Wisconsin.

"It's a walk-on university like everybody knows that," said Chenal. "They take guys like Coach Leonhard and J.J. Watt, like all these special guys, they came from walk-on to greatness."

If there is one word to describe Wisconsin Badgers football, it's family, and Chenal loved having multiple players like Chris Orr, Zack Baun and Mike Maskalunas to lean on for advice.

"It's just like continual," Chenal said. "Nobody's above anybody, we're all in this thing together, we're all here to push each other equally."

Leo Chenal isn't the only one in his family going through the draft process this year. His brother, Badgers fullback John Chenal, is also a current 2022 draft prospect. John was a walk-on who made a positive impact at Wisconsin and went on to be starting fullback.

"It's definitely pretty special to be in the same year and go through it together," said Chenal. "It's interesting because we can kind of bounce ideas off of each other and talk to each other about our individual experiences."

John Chenal had been training in Minnesota during his draft process while Leo was training in Arizona, but both were able to share various perspectives on their training and what their coaches were like.

One name that was just mentioned earlier by Chenal is current Badgers defensive coordinator Jim Leonhard. He has received high praise on both levels. Chenal talked about how Leonhard played a major role in his development in adapting to various schemes in college.

"He seems to have an answer for every single offensive scheme," said Chenal. "He'll have the adjustment ready to go like every single time and it works like every time it's kind of crazy."

Chenal praised Leonhard for being able to coach to every player's strengths and weaknesses, which has helped Wisconsin's defense substantially, especially during the 2021 season where they finished number one in the country out of all FBS schools.

Chenal's performance at Wisconsin has risen his draft stock immensely, and throughout his draft process, he was able to showcase his talents to coaches and scouts.

At the combine, Chenal continued to turn heads. He ran an official 4.53 40-yard-dash. During his preparation, he didn’t have his brother John there training with him for the first time in his life, someone he was so used to having around to train with him.

"It is different, you're in a different environment, but it's kind of the same mental process," said Chenal.

Despite all of that, Chenal still kept the same positive mentality throughout his preparation, like during his 40-yard dash.

"You shouldn't look at every week, you should more look at the bigger picture and kind of zoom out cause I would go up and down and up and down, but the ups would be a little bit more than the downs so it just comes back to trusting that process."

Chenal would also spend time on his own after drills to work on his weaknesses and fix areas of his game that needed improvement. He continued to put in the work and the results showed.

"You just trust the coaches, trust the work that we're putting in, these guys know what they're talking about," said Chenal. "Push the other guys around you, bring everybody up and at the same time realize that although we're working towards a goal, don't forget the football specific stuff."

During Chenal's Pro Day, he put up 34 reps of 225 pounds on the bench press, a jaw-dropping performance that continued to get the attention of several scouts and coaches. It wasn't quite what Chenal had anticipated, but he still kept his head held high and certainly wowed everyone around him.

During the interview, Chenal was asked what he can bring to an NFL team. In other words, what is this team getting in Leo Chenal?

"My main thing I love saying is I'm violent," said Chenal. "I want to use my body and do whatever I can to blow stuff up."

Chenal ended by reflecting on his time at Wisconsin and how he wants to be remembered.

"I want to be remembered as someone who was willing to lay it out on the line for their team," said Chenal. "Someone who took practice, took games seriously. Practice like they played. The linebackers, our room, we gotta be the toughest on the team."

The NFL Draft is just a few short weeks away. Chenal has worked hard up to this point. He's battled the obstacles, the ups and downs, but he is still here and waiting for the day for his name to be called by an NFL team.