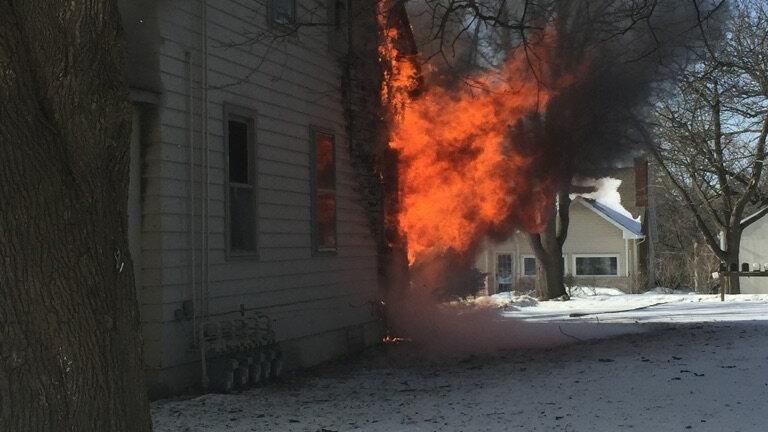 The officers on the department are calling it the “Hail Mary Pass."

The mother who was still trapped on the roof was barely able to breathe at this home behind me.

Afraid her baby would die from the smoke an officer caught the baby below.

Smoke, flames, a family trapped, and the Lake Geneva Police Department rushing to the scene on Elm Street.

"I had a couple residents and a male on crutches in the drive way saying there are a bunch of people trapped on the rear roof," said Patrol Officer William Walser.

A grandmother, mother, and a two and a half month infant were struggling to breathe, when the officer told the mom to throw down the baby.

"I told her mom you have to put your hands out like this and drop your daughter down that's our only option right now. She didn't like that at first but I said you have to do it now she finally did it had a nice drop I caught her," Walser said.

Soon after the mother fell off the roof. The assistant police chief and a third officer had to try to get the grandmother down.

She was on the roof and she was panicking saying "I can't jump, I'm scared to death."

Neighbors gave a ladder to the officers to help the grandmother off the roof.

The assistant chief went to the hospital with minor injuries. One person broke their heal, but police call it a win, especially saving the baby girl.

"She never cried once. I had her in my hands for 25 minutes. She was a good kid."

The fire department is still investigating the cause of the fire.

All four families were displaced, but escaped with their lives.

ORIGINAL: Quick thinking and a lot of trust were on display during a life-saving rescue in Lake Geneva on Tuesday.

Police say they arrived at a house fire near South and Elm Streets to find the home nearly engulfed just before Noon. Four people on the lower level were able to escape, but 2 adults and an infant were forced to crawl out onto the roof. Running out of time, an officer instructed one of the adults to toss the baby into his waiting arms below.

"Fortunately the officer was able to catch the infant," says Lt. Ed Gritzner. "We're pretty proud of him, but we wouldn't expect anything different from him."

Police say a neighbor, Rob Twyning, then used a nearby ladder to help rescue the two adults from the roof.

"I think if the ladder wasn't there, and she had to fall down about 10 to 12 feet from the gutter, I think she seriously would have had internal injuries," says Twyning.

Police say one adult slipped and fell while coming down the ladder, landing on an officer that tried to catch them. Both were injured, but are expected to be okay.

The house has been deemed a total loss. Investigators are working to determine the cause of the fire.