Baby Deer Runs in House and Jumps in Bathtub 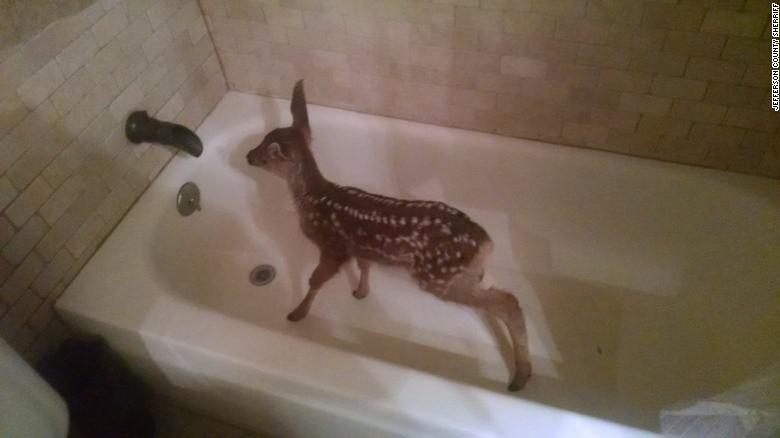 (CNN) Colorado resident Jim Willenbring got an unexpected guest -- like REALLY unexpected -- when a baby deer entered his home and hopped in his bathtub Tuesday night.

Jefferson County police said they received a call about an injured deer inside a home in Evergreen, a mountain town about 15 miles west of Denver.

(We are unsure of the fawn's gender, but we will refer to it as Bambi.)

"(Willenbring) said the fawn was stuck in the fencing, and went out to help the fawn," said Dionne Waugh, a spokeswoman for the sheriff's office.

But in the process, Willenbring left the front door open.

"As I got close he ran along the fence and right inside the house," Willenbring said. "Then down the hall and into the tub."

Deputy Skyler Steele responded to the call in a matter of minutes, wrapped Bambi in a blanket and brought it outside.

"It popped up and happily darted away," Waugh said.

Don't worry, though, Bambi was essentially uninjured. Steele described a small "raspberry" on the fawn's forehead, prior to the rescue. Other than that, Bambi was just fine.

We hope it reunited with family and we are grateful for this hilariously cute picture, one that inspired a couple of jokes at the police department.

"If only," Waugh said, "we could get our own kids in the tub that easily."

This story was originally reported by CNN affiliate KDVR.