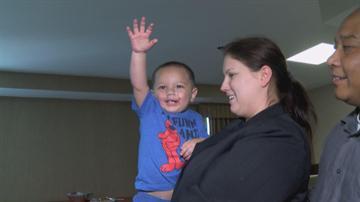 MADISON -- Back on May 28th, a Georgia sheriff’s department raided a home looking for a suspect who didn’t live there. Deputies threw a flash bang into a baby's play pen.

That flash bang blew up right next to a toddler from Wisconsin, nicknamed Baby Bou Bou, almost killing him.

A little more than two months ago he was caught in the middle of a full scale police raid that injured him so badly doctors had to put him into a coma.

\"We want to know we're not going to lose him. The doctors and nurses all gave us the same response... We can't say that for sure. We don't want to give you a false hope.” said his mother, Alecia Phonesavanh.

The family, which includes four children, stayed with Bou Bou's aunt in Georgia for two months.

Police raided the home saying they believed Bou Bou's cousin lived there, and was some type of dangerous drug dealer.

The raid turned up no drugs, no guns, and not even the suspect police were looking for.

It only managed to put the 19 month old in the hospital.

The day following the raid, the department's sheriff defended storming the house. Saying there was enough there was evidence it was a drug house, and no children lived there.

\"It was verbally stated to the SR team… by the neighbor that it's obvious there are children in there.\" said Phonesavanh.

Now that the child is out of the hospital and recovering physically, his parents say he still faces a long road of recovering from the mental trauma.

But he'll do that back in Wisconsin.

A family spokesman says the sheriff in Georgia has told several lies to attack the character of the family in order to cover up his department's mistake of raiding a home based on inaccurate information.