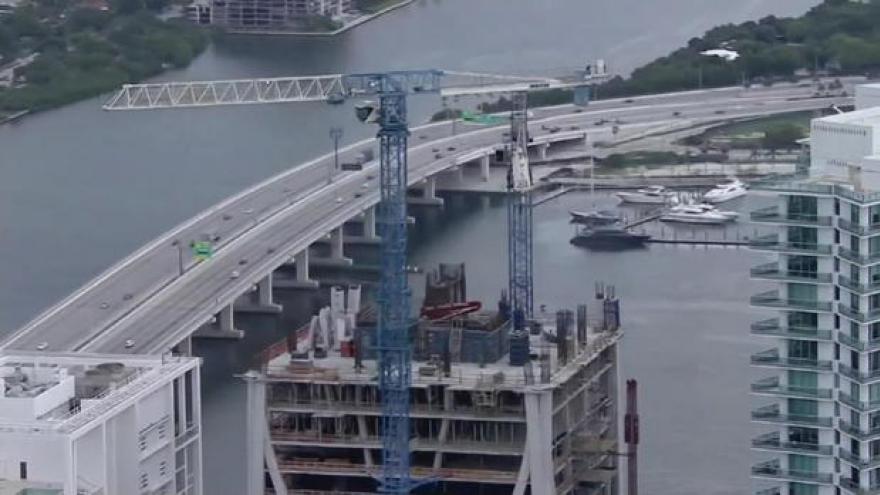 (CBS News) -- People in Miami Beach and other low-lying areas of South Florida are being told to evacuate to higher ground ahead of Hurricane Irma. In Miami, there are big concerns over some 25 construction cranes that cannot be taken down before Irma's expected arrival this weekend. People who live in nearby buildings are being urged to get out.

The massive cranes are symbolic of the construction boom reshaping Miami's skyline. The counterbalances alone can weigh up to 30,000 pounds. You don't want to be anywhere near one if it starts to collapse, reports CBS News' Mark Strassmann.

When Hurricane Irma hits, some cranes could start spinning like weather vanes. They're designed to do that, explains Peter Dyga, president of Associated Builders and Contractors in South Florida.

"If you were to lock it down, they would be presenting more resistance to the wind and cause a bigger problem," Dyga said.

The cranes can withstand winds of up to 145 mph, but Irma's sustained winds have reached as high as 185 mph. There's a fear the cranes may topple over like one that dangled over a New York City street and threatened to fall during Superstorm Sandy.

High-rise residents who choose to ride out Irma are being told to move to their building's interior, not just because of the cranes but also to avoid flying debris.

After Hurricane Andrew tore through Miami in 1992, the city required the use of hurricane-resistant windows. They're designed to remain intact after a single impact from a two-by-four traveling 50 feet per second.

In Miami Beach, which on average is just three feet above sea level, storm surge is the big worry.

Miami Beach has 34 pump stations ready and another 30 on standby. They won't stop the storm surge, only dry the city out after Irma leaves.

Roughly 90,000 people live in Miami Beach, many of them elderly. There are no hurricane shelters on the island, which means traffic is going to be a big problem when people start to evacuate Thursday.