ATF To Witnesses of Milwaukee Arson Fires: "Hit Us Up on Twitter" 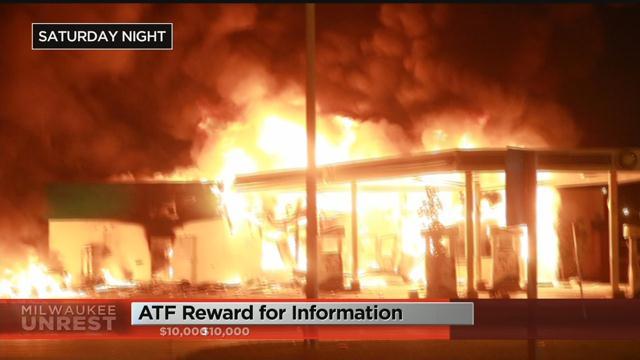 The ATF is picking up the pieces in the Sherman Park Neighborhood and trying to piece together exactly what happened and who is responsible for all the destruction.

Federal agents won't comment on what they've found, but one source tells CBS 58 they have some of what they need to find the culprits.

"We are focusing on the burned commercial structures and we are here as a collective group, we are fact finding," explained Joel Lee, Asst. Special Agent, ATF Milwaukee. "We are putting the pieces of a large puzzle together. What we need is the help of the public.  If they would please call us or hit us up on twitter."

Mayor Tom Barrett said Wednesday that he's encouraged by the relative calm of the past two days and aimed to put it all in perspective with other recent troubles in other cities.

"If you look at what has happened in other cities where there have been disturbances," said the Mayor, "By night three or night four unfortunately still going strong.  We have seen a very great reduction.in the disturbances that have taken place."

Sherman Park will close again at 6 p.m. until further notice.

A 10 p.m. curfew for children 17 and under remains in place.

The violence came hours after a man running from a traffic stop was shot and killed by a Milwaukee Police Officer.

The mayor said a still image of body camera video shows a gun in the 23 year old's hand.

He has called for the release of the video.

The Department of Justice which is in charge of the investigation into the shooting issued a statement that said in part:

"In recognition of the violence that has affected Milwaukee residents, DOJ is working expeditiously...to provide a transparent view of the events that took place August 13th. However, we are not prepared to release any of the video evidence at this time."

Meantime, the name of the officer who shot Smith has not officially been released.

But his name has surfaced on social media and there have been some reports of threats made against the officer.

MPD said in a statement Wednesday:

"Locally we are aware of some general threats against our officers.  MPD takes these threats seriously and is investigating."

The Milwaukee Catholic Archdiocese announced plans for a prayer vigil Thursday at All Saints Parish at 25th and Capitol.

Another sign of healing emerged when more than 100 volunteers from GE Healthcare showed up to help paint and spruce up a school just a block away from the epicenter of the violence, to make sure its ready to welcome children for the new school year.