At Home With The Starrs, part two: Bart and Brett 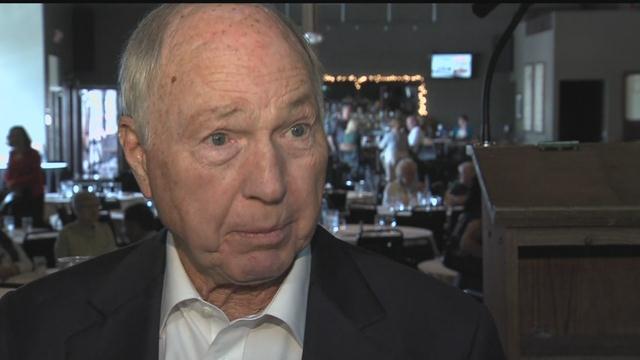 Bart Starr is a fighter. His spirit led the Packers to two Super Bowl wins, and Bart continues to fight to stay present for Brett Favre and the rest of Packers nation.

Maybe the most magical moment of 2015 in Green Bay was seeing Starr muster the strength to be there for Favre's jersey retirement. His wife Cherry shares a touching story from that night: "he looked up at Brett, and when Brett looked down at him, he looked up and said I love you, Brett. And Brett looked down with tears in his eyes and said I love you too, Bart. It was the sweetest moment."

RELATED LINK: At home with Bart and Cherry Starr, part one: the greatest of bonds

Favre called Starr "amazing" that night. The two legendary quarterbacks share a bond that Cherry calls "unique... just a great admiration between them."

After Favre's Packers lost in the NFC Championship Game to the Cowboys early in 1996, Starr wrote a letter from his office in Alabama. In it, he predicted Favre would "win it all" the following season. Those words proved to be prophetic; Favre's Packers beat the Patriots in Super Bowl 31 the following January.

When Brett Favre has his next big moment in August, his long-awaited enshrinement into the Pro Football Hall of Fame, the Starrs will not be in attendance. Cherry hopes Bart can fight through his health troubles to enjoy the moment from home. "I'm not sure he will be aware. I hope he understands what's happening, and we'll be explaining, and we'll probably be in tears, we'll be so happy for Brett and for Deanna and his family."