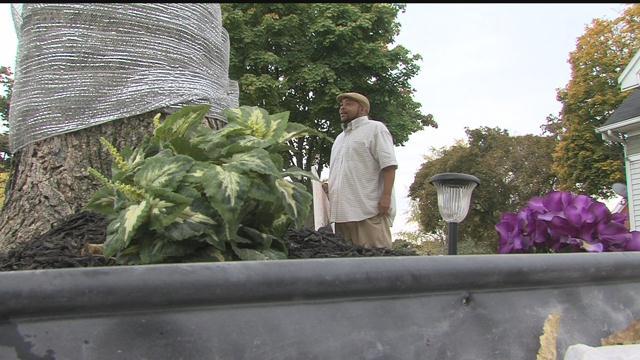 The increasing violence has affected Shannon Johnson's view of the city of Milwaukee.

"We were in the back on the bench, minding our own business and out of nowhere, gunshots fired," he said. "I heard gunshots zooming past my ear."

Johnson's brother, Shavonta, would later die after he was shot outside their mother's home at 39th and Locust. The 28-year-old's family and friends have shared hugs and cried tears over his sudden death.

But releasing the pain is just steps away at a peace garden memorial honoring the victim. It's landscaped with flowers, stones and a ribbon.

"I added a solar light instead of the candle," said creator Camille Mays.

Mays, who lives near the Johnson home, said it's a stark contrast to the typical makeshift shrines with liquor bottles, balloons and stuffed animals.

"When you drive down city streets you see two or three shrines on the block," she said. "It looks like a cemetery."

So Mays is turning death into life, hoping her sense of pride changes the mindset of those breaking down the community.

"It seems to be a sense of recklessness now," Mays said. "I don't understand the recklessness, all the children dying and innocent targets."

Mays heard the gunshots the day Johnson's brother was murdered.

She knows a simple garden won't stop the violence, but said it's a dignified way to support a family looking for justice.

"It brings me a lot of comfort, coming out here and seeing it everyday and looking at it," Johnson said. "And at the same time, I just think of my brother."

There have been no arrests in the September 18th murder of Shavonta Johnson.

Meanwhile, Mays has requests for more peace gardens. You can learn more about the project here.