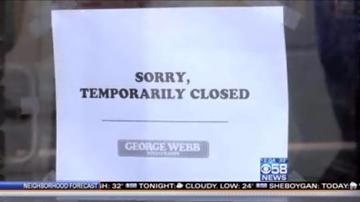 MILWAUKEE-Police say they have made an arrest in the early Friday morning shooting that left a George Webb restaurant cook dead.

It was around 2 a.m. when a group of unruly customers was asked to leave the eatery not too far from the UW Milwaukee campus.

When the waitress couldn't handle the group on her own, a 21 year old cook came to her aid and got the disorderly patrons to leave.

One of those patrons returned a short time later with a gun and shot the cook in the chest. He died at the scene.

Based on surveillance and interviews with witnesses, police developed a suspect quickly.  They say he has a criminal record.

This is the MPD statement:

\"The Milwaukee Police Department has arrested the 28-year-old male suspect believed to responsible for the homicide that happened shortly before 2 a.m. today in the 2900 block of N. Oakland.  The suspect was arrested tonight in a home on Milwaukee's north side.

George Webb issued a statement expressing its condolences for the victim's family. It has not indicated when the restaurant would open again.