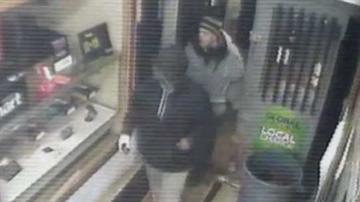 Milwaukee--  Two of the three suspected wanted for a shooting and robbery caught on video at a Milwaukee grocery store are in custody facing federal charges.  23-year-old Joshua Mueller, 26-year-old Sedrick Brown, both of Milwaukee, and 23-year-old Steven Bugni formerly of Milwaukee were charged with one count of interference with commerce by robbery, and one count of discharging a firearm.  If convicted of the federal charges handed down under the Hobbs Act, they'll each face up to 20 years in prison for armed robbery, and a mandatory minimum sentence of 10 years for firing the gun.  The Hobbs Act was established in 1946 to prosecute organized crime and crooked union bosses, but is being used more often today to severely punish repeat offenders involved in violent armed robberies like the one January 28th at Mother's Foods on Milwaukee's north side.  U.S. Attorney James Santelle spoke about the feds prosecuting more street crimes during a recent episode of Eye to Eye on CBS 58.     \"They're not necessarily things that the (district attorney) can't do, but especially when there are groups of people who are identifying themselves going from location to location, attacking those legitimate businesses and taking their money, terrorizing the community....that becomes an impact upon the larger community inside the jurisdictional base that we have to prosecute those cases, that's an impact upon the federal commerce as well.\"