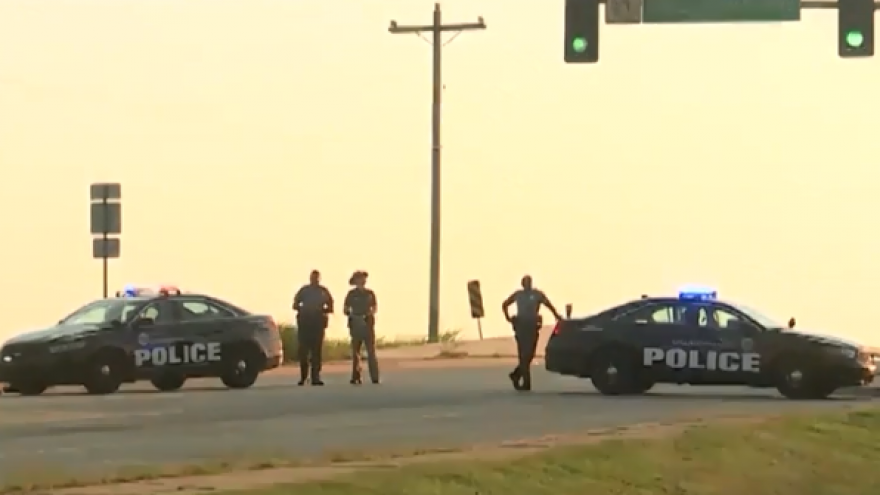 A man opened fire with a handgun in Louie's Grill & Bar, striking three people inside the restaurant from a position outside the front door, Oklahoma City Police Capt. Bo Mathews told reporters.

As the gunman ran from the scene, two bystanders got their own handguns from the trunks of their vehicles, then confronted and fatally shot the attacker outside the restaurant, Mathews said Friday.

"They were able to shoot this suspect and put an end to this very dangerous situation," Mathews said, adding that the men -- Carlos Nazario, 35, and Bryan Wittle, 39 -- did not know each other. It's not clear who fired the fatal shot. Police initially said only one man fired on the attacker.
The bystanders' actions were "well within their legal rights" and likely would be protected by good Samaritan laws, Mathews said. He deferred a final call to the Oklahoma County district attorney, whose staff did not immediately respond to CNN's request for comment.

"These guys were protecting somebody else's life," the police captain said. "You can say they are heroes."

The attacker was identified by police as Alexander C. Tilghman, 28, of Oklahoma City.

"It doesn't look like he knew anybody at the restaurant," Mathews said, adding that Tilghman had no known history of mental illness and appears to have acted alone. The motive remains unknown.

The three who were wounded remain in good condition Friday, police said.

The National Rifle Association quickly seized on the incident as "just another example of how the best way to stop a bad guy with a gun is a good guy with a gun," according to a tweet. The powerful gun rights lobbying group commonly touts the mantra as part of its strategy in the wake of gun violence to identify ways -- apart from restricting firearms -- to enhance public safety.

The NRA also took a swipe at Gov. Mary Fallin, who two weeks ago vetoed a bill that would have made Oklahoma the 13th state to let residents carry guns without a permit.
In explaining her veto, Fallin, a Republican, noted that the bill would have eliminated firearms training requirements and softened background check rules.

The bill "eliminates the current ability of Oklahoma law enforcement to distinguish between those carrying guns who have been trained and vetted, and those who have not," Fallin said, according to a statement.

'They had taken him down'

When gunfire erupted Thursday at Louie's, in northwest Oklahoma City, "it sounded like, you know, any kind of restaurant noise, a rack of plates crashing ... glass breaking," Ron Benton, who was inside the cafe when the shooting began, told CNN affiliate KFOR.

When the shooting stopped, Benton and some friends headed to Louie's parking lot. They spotted the gunman walking on a sidewalk, he said.
"He was just a 20-something-year-old kid," Benton said, "Didn't look very old. He was wearing ear protection and eye protection that you would have at a shooting range."

Then, Benton told KFOR, he saw a car circle back after exiting Louie's parking lot.

"A guy jumped out of it and went for the back of his vehicle. I just assumed maybe it was an off-duty officer or something like that," he said. "It was just the way he moved, whoever it was. He just appeared to be somebody who had some training, some weapon training."
Benton pointed the man toward the suspect, he recalled.

The gunman, he said, wouldn't drop his weapon.

"I popped my head up, and they had taken him down," Benton said.

'Very odd to be in the middle of it'

Four people were injured during the shooting, including a woman and a girl who were shot inside Louie's while celebrating a birthday, CNN affiliate KOCO reported. They were hospitalized, said Mathews, the police captain.

Another woman also was wounded by gunfire, and a man fell and broke his arm after Tilghman began his assault, police said.

Police detained "a large number of witnesses" and, early on, said there was no indication of terrorism

"It's like, every day you hear the same story," Benton told KFOR. "But it was just very odd to be in the middle of it."

CNN's Nicole Chavez and Amanda Watts contributed to this report.