Arlington soldier files lawsuit to get military dog back 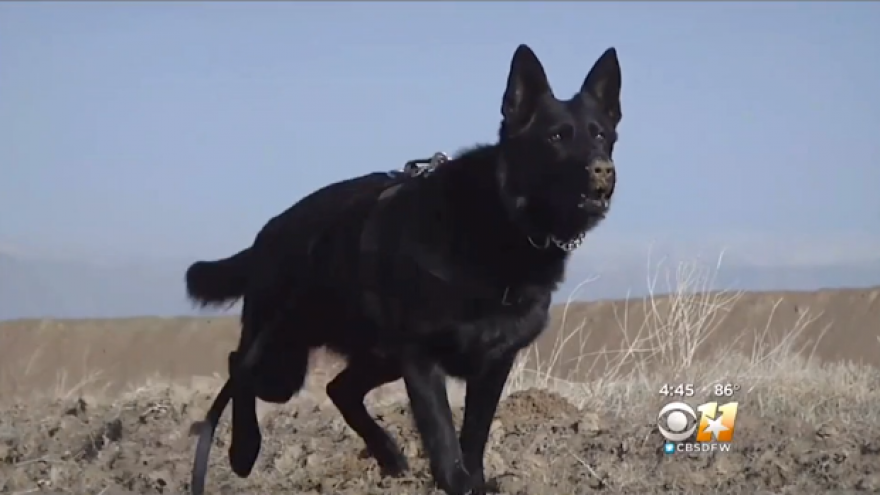 ARLINGTON (CBS11) – Hundreds of soldiers said the Army gave away their military dogs without telling them.

Now, a soldier from Arlington has filed a lawsuit to get his dog back after a Consumer Justice investigation in May 2016.

Ryan Henderson filed a lawsuit against Norma and Shawn Richardson, the couple who adopted his military dog named, Satan.

Satan is a German Shepard who served in the Middle East. (credit: Lt. Ryan Henderson)

According to dozens of former handlers and lawmakers, more than 200 military dogs were adopted out to agencies and civilians through several public and private events in 2014.

The handlers said they were never notified or given a chance to adopt the dogs even though a law passed in 2000, said handlers “may” have the first choice.

However, the Army said it did contact at least 40 handlers about the adoptions.

The scandal led to the National Defense Authorization Act, which now ensures handlers will get the first opportunity.

Henderson said nothing has formally been done to help the soldiers get reunited with the dogs already given to other families.

Henderson said he had no other choice but to file a lawsuit.

“Because I want to get him back, that’s my end goal. Other avenues had been exhausted and that’s the only chance we had left,” said an emotional Henderson.

He’s the first soldier to file a lawsuit over the adoption issue.

The suit was filed in North Carolina where the adoption took place and where the Richardsons live.

The Richardsons did not return CBS 11’s request for a comment on the lawsuit.

The couple said last year the Army told them his handlers didn’t want him when they adopted Satan.

They said they found out Satan’s handler wanted him 16 months after the adoption.

They said they love Satan very much and have no plans to give him up.