Arkansas says co-worker owes her half of lottery win 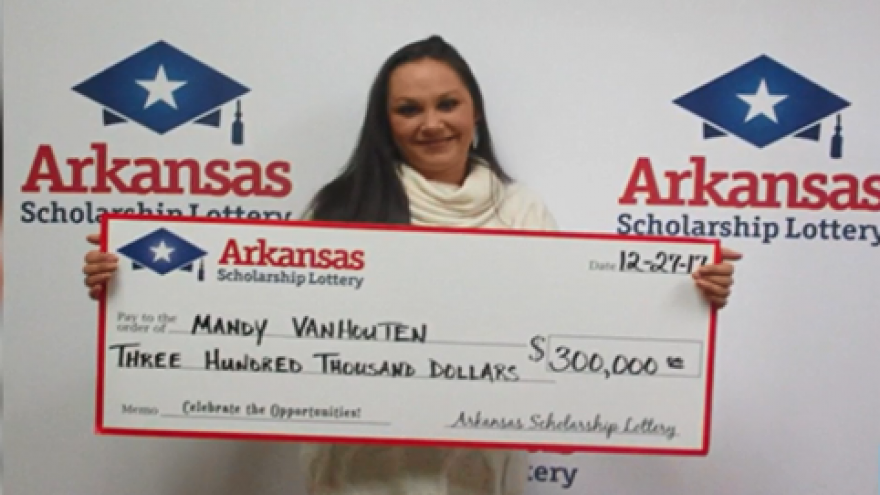 STUTTGART, Ark. - (KARK/CNN) Waitresses at a Stuttgart staple split their tips every day.

We reported Wednesday that a Carlisle woman hit it big on a scratch off. Her coworker claimed Thursday that half of the winnings belong to her.

"It was kind of like somebody died for somebody to tell you that they don't think you deserve it and their decision has been made," said Leslie Underwood.

The waitress at Sportsmans Drive-In got a rare break the Friday before Christmas to open a gift from her boss.

"He always gets them and he always wins," Underwood said.

Lucky lives up to his name when it comes to the Arkansas Scholarship Lottery. To spread some holiday cheer, he bought a roll of scratch offs from G&B Liquor Store for his waitresses.

"He told us whatever we won, it would be split between us for our Christmas bonus," Underwood said.

She and fellow waitress, Mandy Vanhouten, scratched off their pile together at the bar.

"She handed me five and she had five," Underwood said.

"We were both reading the back of it trying to find the little, 'You're pranked!,'" Underwood said. "But no, it was a real one."

The trick was still to come.

"We talked about how life changing it would be and what we were going to do with this money," Underwood said. "She even talked about giving back since it was such a blessing."

Underwood wanted to take her kids on a once in a lifetime trip.

She and Vanhouten were going to claim the money together in the new year.

"She decided to take it and run," Underwood said.

The mother of five saw Wednesday the picture of Vanhouten with a check in her hands and a big smile on her face.

"It's a little emotional," Underwood said as she started to cry.

The two have been best friends for nearly a decade.

"I helped her get the job, put in a good word, stuck my neck out for her, let her stay with me so she didn't have to drive back and forth," Underwood said. "I think that's what hurt me the most is as much as I've done, she could have done right for once."

She hasn't heard from Vanhouten.

We tried calling her and got her voicemail, "Hey, it's me. Leave a message." We did and have yet to get a call back.

Vanhouten also never came into work for her shift this week.

"I asked, 'Is she sick or something?,' and she [Underwood] said, 'It's a long story,'" said Haley Johnson, their coworker.

Johnson has been filling in for Vanhouten. She typically works a different shift with another waitress. That duo didn't win as big.

Johnson admits she first felt a pang of jealousy at her coworkers' good fortune but now just wants Vanhouten to live up to the deal.

"Things have been a little hectic around here since that happened," she said. "I would think you'd have the courtesy to at least split it like you were supposed to instead of just claiming it all for yourself, saying you needed it more than she did."

Sitting in the site of the "Best Burger in Town," "Best Place to Work" and now, home of the $300,000 scratch off winners, Underwood can't help but mull over a warning from her boss.

"Lucky told us here at the bar, 'Y'all won't be friends after this.' We were like, 'Why would you say that?,'" Underwood said. "Money changes people. Now we see."

Underwood hopes her luck turns around, but she won't be taking any more chances with the lottery.

"That was the one in a million so I don't think I'll be buying any to try it again," she said. "Don't want to lose what I have."

If she doesn't get her share of the winnings, Underwood plans to take legal action.

The catch: Vanhouten is the only one who signed the back of the ticket.