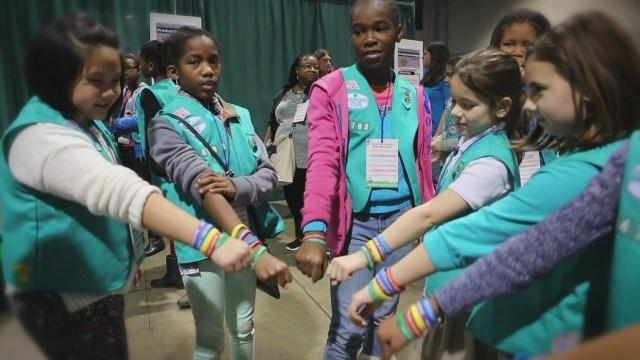 (CNN) -- When I was a member of the Girl Scout Council of Greater New York, cookie time was my favorite time of the year, from first grade to 12th grade.

I was the girl who hit up teachers before anyone else had a chance, the co-worker's daughter who showed up in person before it became the norm to pass around the order form. Camping was fun, but nothing beat the joy of watching my order form fill with names as I went from door to door in my apartment building until I reached the bottom.

If I did not finish the season with at least two order forms, I had failed.

Plenty has changed since I left the game more than a decade ago. For the first time this cookie season, some Girl Scout troops are using online ordering in addition to paper forms as part of the new Digital Cookie program. Part of me is jealous, but mostly, I'm skeptical. What about the value of the face-to-face sale? Would that get lost in digital interactions?

I don't remember setting goals beyond \"sell the most in my troop,\" which I usually did. Winning badges, pins and bragging rights was good enough for me. But I like to think the people skills that went into making a sale somehow helped prepare me for adulthood. I'm no Luddite, but I can't help but wonder whether today's \"digital cookie entrepreneurs\" miss out on that experience.

To find out, I attended a recent cookie rally in Atlanta hosted by the Girl Scouts of Greater Atlanta -- such rallies being another facet of the program that did not exist when I was growing up. The parents and Scouts I spoke to said they did not see Digital Cookie replacing face-to-face sales anytime soon. They see it as a tool that will generate more sales and foster technology skills that will prepare the girls for the modern workforce -- once the tweaks are finally worked out.

I met Elizabeth Carr and her 12-year-old daughter, Katie, before the rally. Katie would be attending Cookie University, a program for older Scouts introducing them to the financial and marketing aspects of running a business.

Carr, a troop leader and service unit director, was hoping to pick up tips on how to lead her girls to better sell cookies. She was also hoping Katie would learn how to make the most of the new online platform so she could share the knowledge.

\"She's my tech person. I hope she learns so she can teach us,\" Carr said.

What else has changed since my days of selling cookies in the 20th century? For one, it turns out that many parents are no longer keen on sending their girls out to knock on strangers' doors. Due to safety concerns, parents would rather have their daughters sell primarily to people they know or whom their parents know, said Shelley Johnson Carey, a former Girl Scout and troop leader in Washington (which is sitting out the beta phase of Digital Cookie).

Moreover, for families juggling a host of activities and commitments, booth sales and the familiar tradition of passing the order sheet around the office are more convenient than random door-to-door sales, said Carey, who spent more than a year researching the cookie program and following a troop for her MFA thesis at Goucher College, \"Thin Mint Memories: Scouting for Empowerment Through the Girl Scout Cookie Program.\"

The shift to online is a \"natural progression\" for the cookie program, she said, one that has the potential to put some of the responsibility back on the girls, depending on how much parents let them do.

\"Digital sales seem appropriate for kids who have been on computers pretty much since they were born. It brings the cookie program into a realm where kids are spending most of their time,\" she said.

\"Door to door builds persistence, but we're in a new era with digital sales,\" she said.

Girl Scouts of the USA says Digital Cookie is not intended to replace door-to-door sales, which are still a \"cornerstone\" of the program, said Kelly Parisi, chief communications executive for GSUSA. In fact, a mobile app that some councils are using was designed \"to help enhance in-person sales by allowing the girls to take orders more efficiently,\" she added.

\"Door-to-door sales aren't going away,\" she said. \"Digital Cookie is taking our iconic cookie program to new heights, and allows girls to learn more about running a digital business.\"

The focus on safety was evident at the rally, where a self defense booth offered girls a chance to practice hitting a dummy. In another area, girls could knock on a makeshift door and learn what to say to people who invite them inside.

The people I spoke to said they expected most sales to come from in-person interactions. Cadette Kelci Trotter of Fayetteville, Georgia, said booth sales would probably make the biggest contribution to her goal of 2,015 boxes of cookies. The 13-year-old also saw value in the platform's ability to reach untapped markets.

\"More people use phones, and they're not going out as much, so I think it will get me more customers,\" she said.

Her mother and troop co-leader, LaJoyce Perry-Trotter, also was eager to use Digital Cookie to reach out-of-town relatives and friends -- if they were willing to pay a hefty shipping and handling fee, starting at $11.25 for up to six boxes. Or they can place the order online for a $1.25 handling fee and have the girls take care of delivery.

Mostly, she liked the idea of her girls becoming familiar with digital tools that have become the norm for modern business operations.

\"Being in the 21st century, we need to give girls the tools to teach them how to be international businesswomen,\" Perry-Trotter said. \"We don't just have to do face-to-face; we should take advantage of all available avenues.\"

Digital Cookie works in one of two ways, depending on the council: a Web-based platform or a mobile app. Both are customized order forms that include the Scout's first name, a sales goal and a picture if they choose to add one. A \"cookie earnings\" blurb describes what the troop will do with the proceeds; a \"cookie learning\" blurb includes the Scout's personal reflections on what she has learned from selling cookies.

Nearly 90 of the 112 Girl Scout councils nationwide are participating in Digital Cookie during the 2014-15 cookie season, with additional councils expected to be on board by the end of 2015 using an updated version, according to the Girl Scouts of the USA. A little more than half of the councils participating in Digital Cookie are on the Web-based platform.

Greater Atlanta uses the Web-based version, and troops are still setting up. At one booth at the cookie rally, program coordinator Sarnethia Sykes sat at a table in front of a laptop showing anxious parents how to set up their accounts.

She pulled up a profile and pointed out features. The profile that administrators see includes pie charts showing a breakdown of cookies sold, a line graph comparing online and offline sales.

\"It's just one part of the cookie program. Most sales are still going to be in person,\" she said.

Jazmin Murillo of Troop 15347 from Duluth, Georgia, approached the booth with a gaggle of chatty girls swirling around her. It's her first year co-leading a troop, and she was having problems setting up accounts. A volunteer walked through a checklist of troubleshooting questions.

Getting her daughter's profile up and running is a high priority because she has lots of relatives who live outside Georgia, she said.

Booths and in-person sales will account for most of her daughter's sales, she said. But she liked the idea of her daughter maintaining the account on her own.

\"For the big girls, online sales are better,\" she said. \"They can set up goals and learn how to do it digitally, and those are skills they'll need in the real world.\"

Moving with the times

What else has changed since I was selling cookies? The prizes. The chance to win laptops or TVs is a far greater incentive than the forgettable trinkets I was striving for.

Apparently, winning is not the whole point anymore. The cookie program has evolved from a prize-oriented fundraiser into a goal-driven, mission-oriented business, one that endeavors to groom \"cookie CEOs\" through five clearly articulated skills: goal-setting, decision-making, money management, people skills and business ethics.

The goal of the program was to teach girls to decipher brands, set business goals and create tailored marketing approaches, said Lauren Burford, a former Scout and volunteer who organized Cookie University.

\"We're in the technology age, and we have to move with the times,\" she said as girls walked past her into the booths filled with tables.

That's where Digital Cookie comes in handy, said volunteer Victoria Cooper. They provide girls with real-time sales figures, allowing them to track the progress of their goals and adjust marketing strategies.

\"From kindergarten to fifth grade, the cute faces sell cookies. As you get older, it gets harder. You've got to be able to sell cookies,\" Cooper said.

Elizabeth's Carr daughter, Katie, acknowledged this harsh reality. That's why she likes the idea of the digital profiles, so people can learn more about who she is and her goals. Her biggest gripe so far is that her ability to customize the profile is limited by the template and that because she is under 13, her mother controls it, not her.

Her troop wants to spend its cookie money on camping and ziplining this summer. They earn 55 cents from each box sold, and ziplining costs $50 per girl, which is why her individual goal is 1,000 boxes. Her profile shows a picture of her smiling next to her favorite horse, Moon, at Girl Scout camp.

That's more information than my customers ever learned about me. I wonder if it would have earned me a better prize.