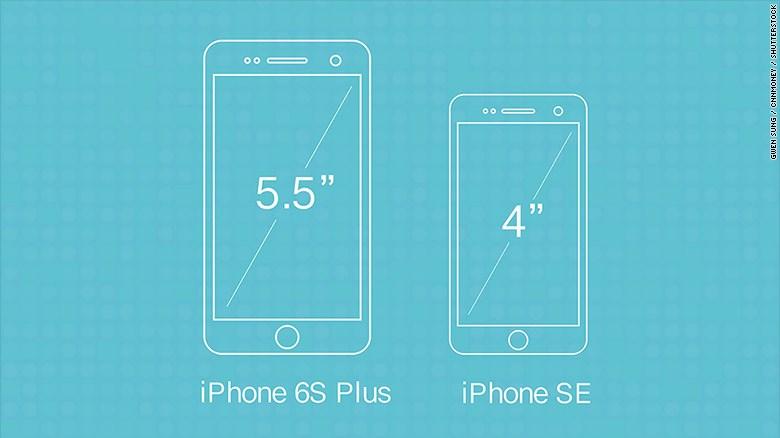 The key marketing words for Apple products have usually been thinner, faster, bigger. iPhones have grown up over the past nine years, going from the original 3.5-inch display to the iPhone 6S Plus' 5.5-inch screen. Apple went in the opposite direction and announced a new iPhone that's actually smaller.

The big iPhone announcement of the day was for a smaller device. the iPhone SE is a 4-inch iPhone with updated internals. It looks like the iPhone 5S, Apple's last 4-inch phone released in 2014, but has the same processor and graphics performance as the iPhone 6S. Inside is Apple's A9 chip, which doubles the speed of the iPhone 5S. It can use Hey Siri, the hands-free voice assistant, has a 12MP camera, and shoots 4k video. There is an NFC chip inside so the phone can work with Apple Pay.

The smaller iPhone is an attempt to appeal to fans of more pocketable devices. Last year, Apple sold 30 million phones that were 4-inches and smaller. A chunk of Apple customers have resisted upgrading to the recent 4.7-inch and 5.5-inch smartphones. According to Mixpanel, a third of iPhone owners are still using a device with a 4-inch screen or smaller.

The 16 GB iPhone SE starts at $399 but will be free with a two-year contract or $17 a month on an installment plan. The company will start taking orders for the phone on March 24, and it will be available on March 31.

Apple (AAPL, Tech30) really wants people to try out the Apple Watch. Tim Cook announced a new line of straps for the wearable, including all new woven nylon bands, a space black Milanese Loop, and additional sport and leather bands in a variety of colors.

Pretty watch straps on their own might not be enough to lure in new customers, so Apple dropped the price of the watch. It now starts at $299.

Why go small? Apple says it sold 30 million four-inch iPhones in 2015, so there's clearly demand for a smaller, cheaper iPhone.

Before the iPhone SE and Watch announcemenst, Cook opened with what he admitted is "on everybody's mind": encryption.

"We built the iPhone for you our customers and we know that it is a deeply personal device," said Cook. "For many of us the iPhone is an extension of ourselves."

"We need to decide as a nation how much power the government should have over our data and over our privacy," said Cook. "We will not shrink from this responsibility."

On Tuesday, Apple will face off against the FBI in a California court.

Apple brought out Lisa Jackson, its vice president of environment, to talk about a new, special Apple employee.

Liam is a custom robot that takes old iPhones apart to recycle them. While it disassembles them, it detects what components can be reused and recycled. It identifies materials in a device like gold, silver and tungsten. In the future, you might see a Liam robot doing its thing inside an Apple store.

Apple uses 100% renewable power in 25 countries including the US and China.  In China, Apple even built a solar farm to accommodate adorable grazing yaks.

Apple also announced a new iPad that will cram the power of the iPad Pro line in a smaller package. With a 9.7-inch display, the new iPad Pro will look similar to the iPad Air line. But inside it will have the Pro's speedier processor. It will be able to connect to Apple's snap-on smart keyboards (expect a new smaller version of the keyboard just for this iPad). And stylus fans can rejoice, as the new iPad will work with the Apple Pencil.