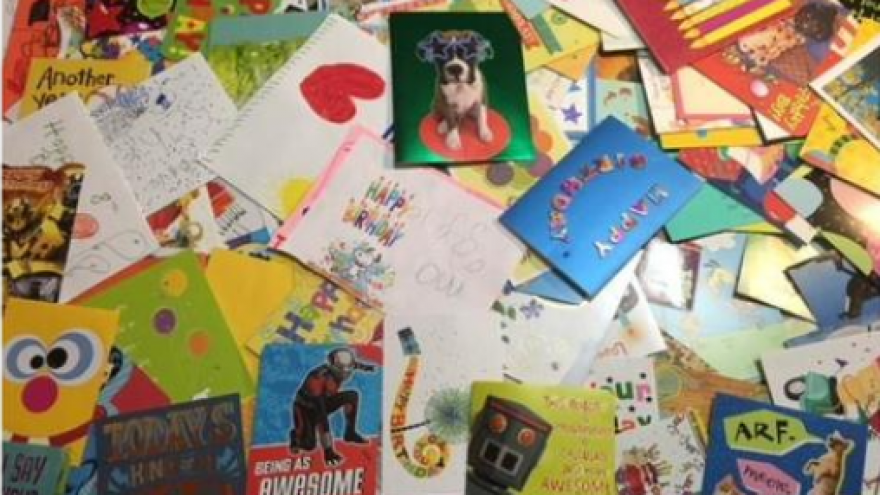 ANTIGO, Wis. (WSAW) - Amanda Neumann was killed in a car crash on Oct. 21. The Antigo woman left behind two young boys, one who was celebrating his 8th birthday just 13 days later.

Aiden Neumann celebrated his birthday on Nov. 3. After receiving a Halloween card in the mail, his uncle Kyle Crum saw the joy it brought him, just days after Amanda was killed. Crum posted on Facebook to ask friends and family to mail birthday cards. Within days, mail started pouring in from all over the country.

"He said 'well you know we'll get him some birthday cards, we'll just put a little post out there on Facebook for friends and family. Maybe these coming in the mail will help take his mind off and bring him some happiness,'" said Tammy Bruss, Aiden's grandmother and guardian.

"It gained some traction real quickly, and we were able to get all these cards," said Crum.

"There's a lot, and they all came from different people," said Aiden.

Bruss is now the guardian of Aiden and his younger brother, Jase.

"She'd be overwhelmed. Beyond overwhelmed that people took time out for her boy that was turning 8 to do this," said Bruss.

"It means a lot to him, to go to the mailbox and have something with his name on it, just specially for him. He's been able to have a lot of fun and just brighten up days during some really difficult times," said Crum.

Although the cards were mailed to Aiden, they also mean something to his family coping with the loss.

"It shows him there's kind people out there everywhere. With even what has happened to us, there's a lot of kindness out there," said Bruss.

And for everyone that sent something to Aiden, this family is forever grateful.

"During this time I just felt like nobody cares. But I was wrong. A lot of good people out there. And I'm very thankful for all these good people and for everything they sent him," said Bruss.

"I would like to thank everybody. It's amazing what people can do when they come to together," said Crum.

Thanks to the spread of the Facebook post, Aiden received almost 300 birthday cards from all over the country. He even got a card from Hawaii.

Bruss said she's gotten a special box where she'll keep all the cards for Aiden, so that one day when he's a little older, he'll be able to read all the messages and kind thoughts sent to him on his birthday.