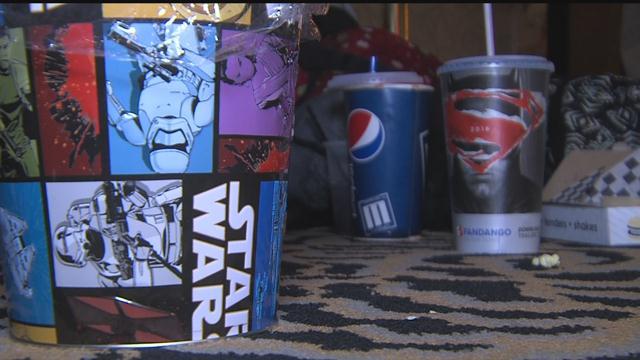 "I've seen every opening," she said. "My dad took me as a young child. We saw the original Star Wars 19 times in the theatre."

So it shouldn't surprise you that Randal arrived at 4 p.m. Wednesday, to see the Star Wars marathon showing that begins at 2 a.m. Thursday. She brought her kids who've never seen one movie.

"I'm tired already, but it's going to be a long wait," said Savannah Dagostini.

It'll be a long day too. They'll spend roughly 20 hours inside the theatre, watching episodes one through six, leading up to the first showing of The Force Awakens.

"I'm hoping to see a lot of excitement, some surprises," Randal said.

Here's a surprise to think about.

Amateur historian James Heinz believes Luke Skywalker's character is based off of a Civil War soldier from southeastern Wisconsin.

"His name is Howard Cushing," said Heinz. "He's one of the famous Cushing brothers."

There's a park and memorial in Delafield in honor of them. Heinz said science fiction writer Edgar Rice Burroughs uses Howard as the basis for the character, John Carter, in his novels.

"These novels are very influential because they introduce the concept of we're both in the future and the past," he said.

A future and past where lasers and spaceships are used in fights to save princesses.

While some may think his theory only seems likely in a galaxy far, far away, fans hope this new journey of good versus evil holds true to the originals.

"It's so exciting," Randal said. "We've been waiting for a long time."

Marcus Theatres is allowing people to dress up to see the new movie, but they can't wear masks. Website Ranker.com said the overall most popular Star Wars character is Darth Vader and their survey shows the state of Wisconsin agrees.