Snow continues to fizzle for some western communities. Most of Fond du Lac, Dodge and western Jefferson counties are pretty much done with the snow for the night but the rest of the area will see lake effect snow on and off throughout the night. Lake effect will pinwheel south and be out of Kenosha County around 6 a.m. Monday morning when the advisory ends. An additional inch or two of new snow may be possible for most. 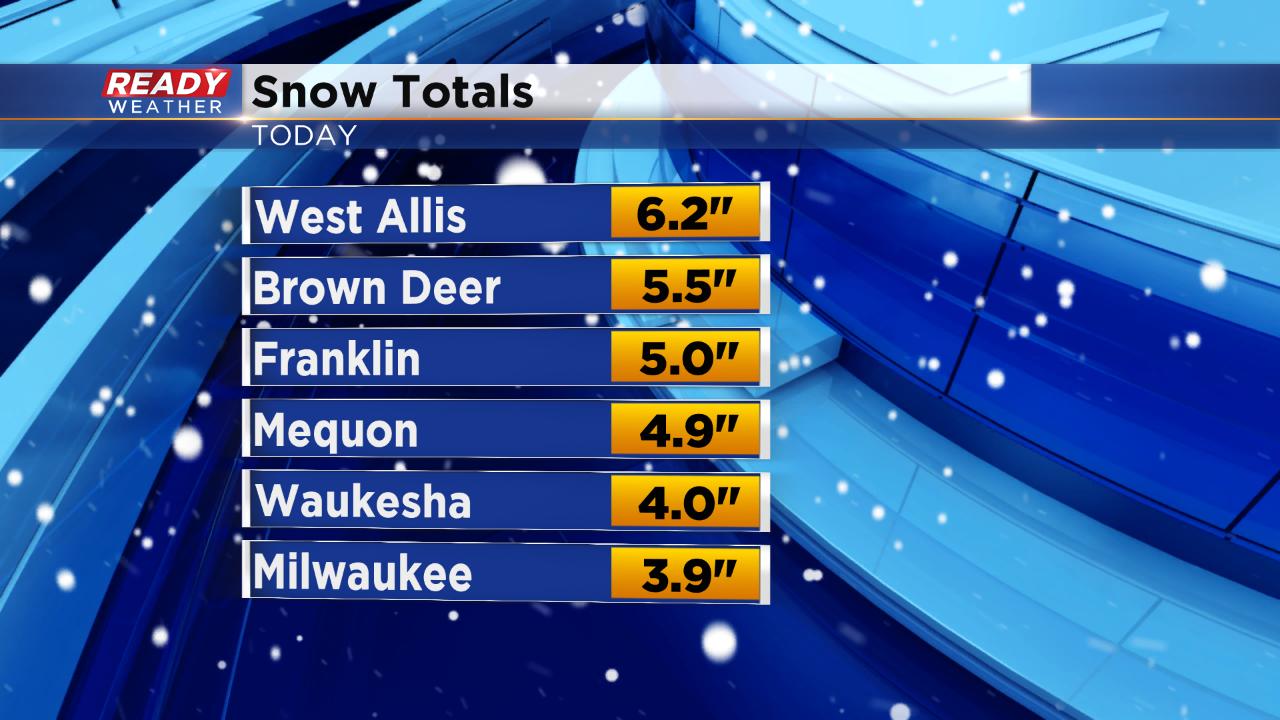 Some fresh snow reports have been filtering in this evening and West Allis has won (or is it lost?) with just over 6". Most of the area picked up 3-5".

The lake effect snow machine is starting to kick in. A heavy band of lake effect snow has been pushing into Ozaukee and Milwaukee Counties over the past hour and will continue a push to the south. Moderate pockets of snow are still likely. 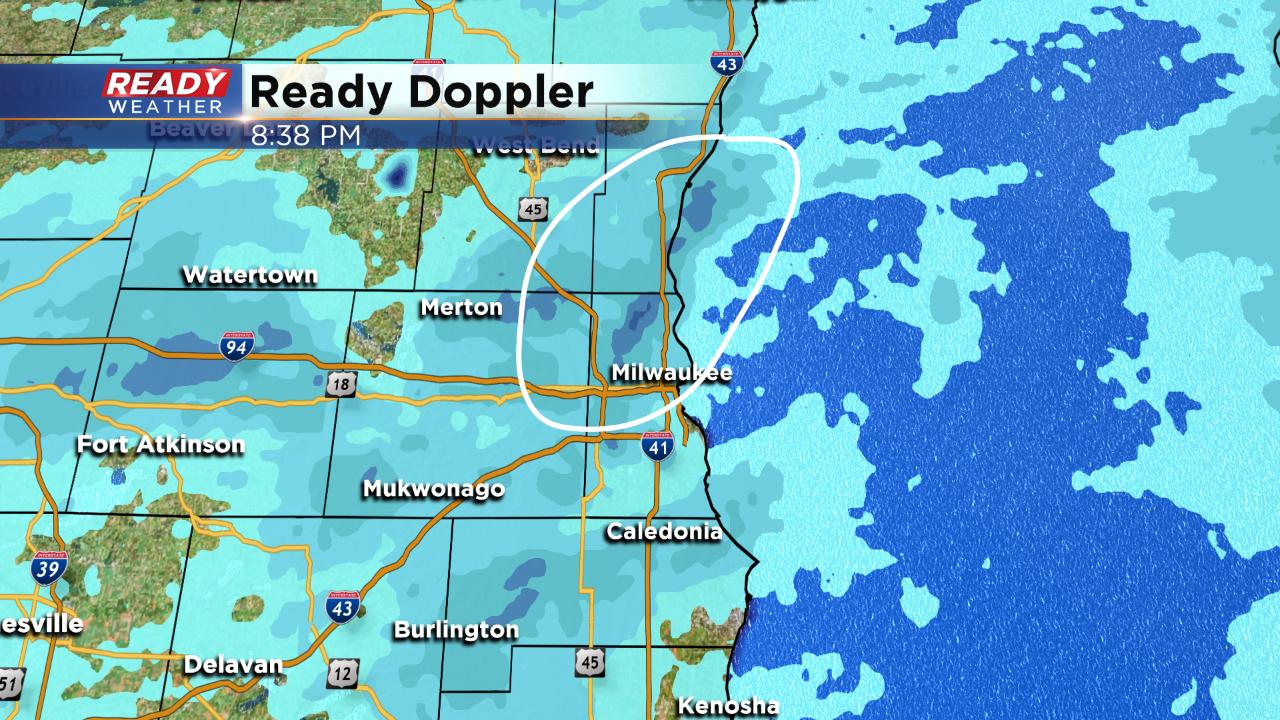 Because of the intensity of lake effect snow some areas may see a good chunk more than 6". Areas under a lake effect snow band for a long time could see an additional 3" through Monday morning.

A batch of moderate snow is currently moving through most of southeast Wisconsin as the bulk of steady snow starts to wrap up. Once the steady snow starts we will see a switch to more lake effect and lake enhanced snow. Snow reports continue to go up with Milwaukee's airport seeing 3.7" at the 5 p.m. observation. Most of southeast Wisconsin has seen 2-4". 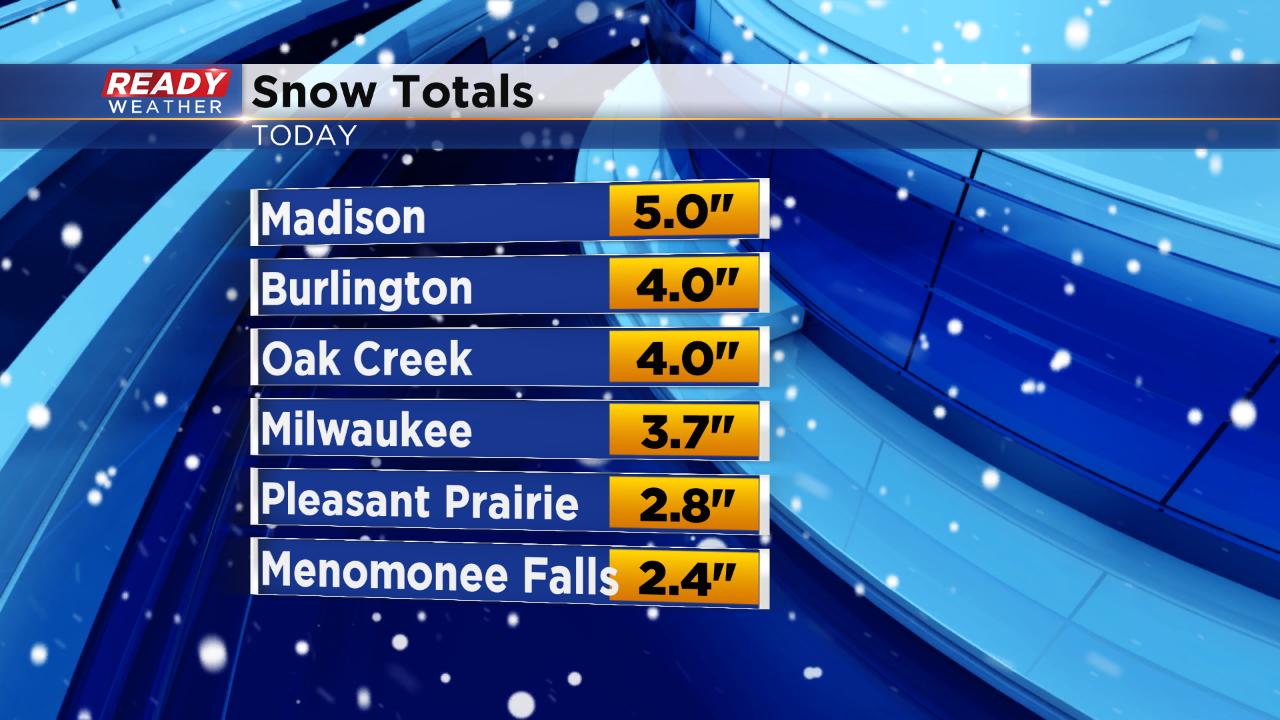 Snow could linger as late as 5 a.m. Monday for lakeside spots with another 1-3" of snow possible.

Steady snow is coming down for most of the area although some southern spots have seen breaks here and there. 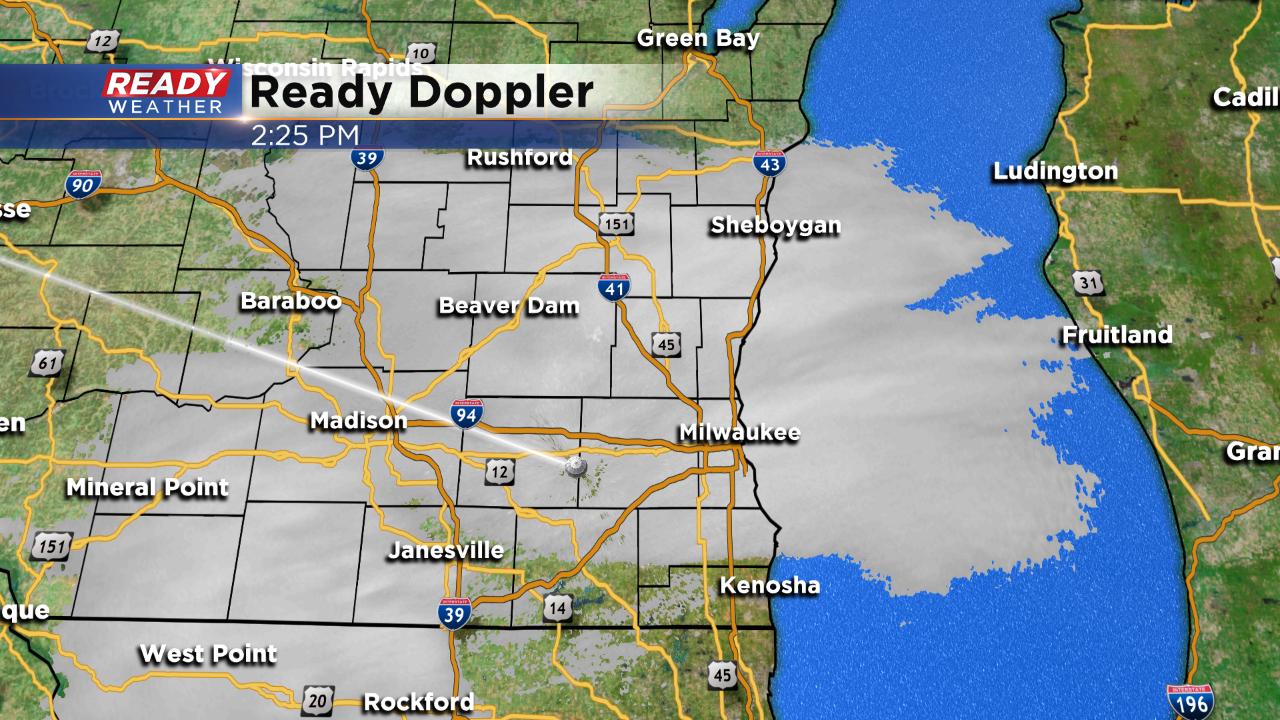 Initial snow reports are coming in with most of the area between 1-3" so far. Parts of Dane County have been hit the hardest with Madison showing a snow report of 5" so far. At noon, the official total at Milwaukee's airport was 2.0". Another 1-3" of snow is to be expected the rest of Sunday into Monday morning. Storm total snowfall will still range from 2-5" for most with isolated spots around 6". 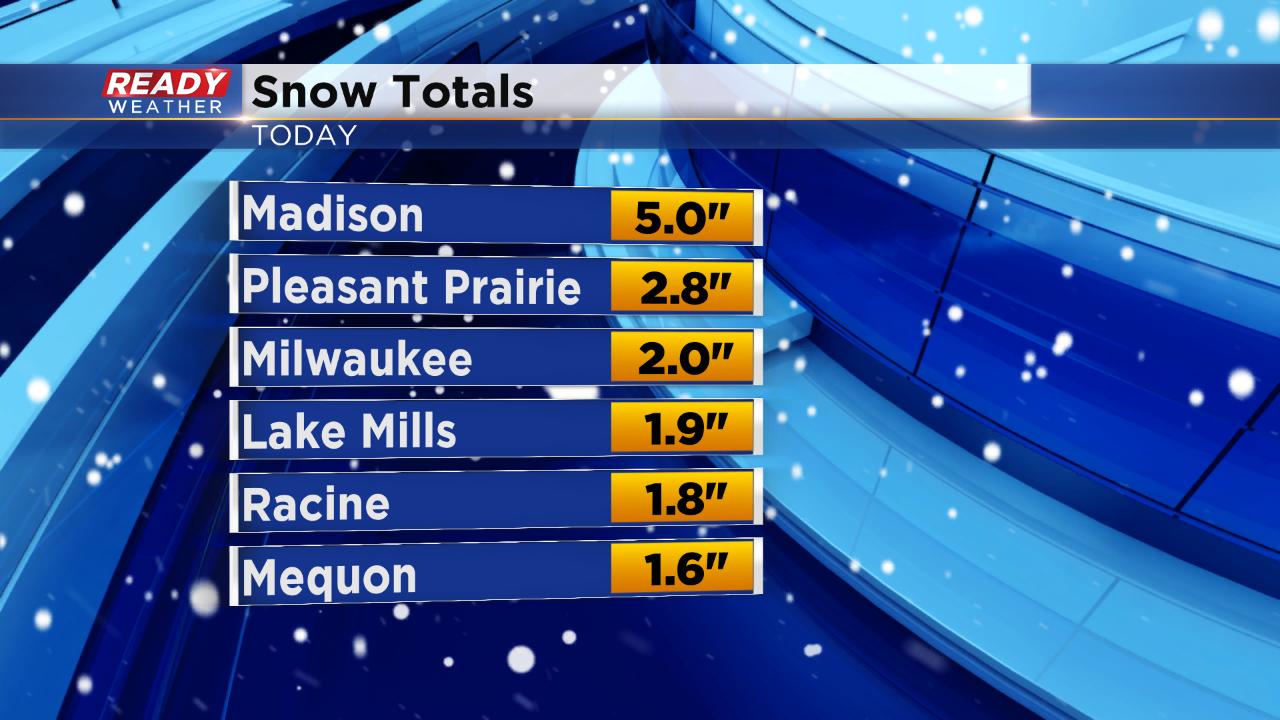 Light steady snow is currently falling for most of southeast Wisconsin. preliminary snow reports are starting to come in with most spots between 1-2" although a few isolated 3" measurements have been reported.

Here's a look at current visibility which tells us where the heavier snow is falling. The lower the visibility, the heavier the snow. Blowing snow may also be an issue with wind gusts to 25 mph today. 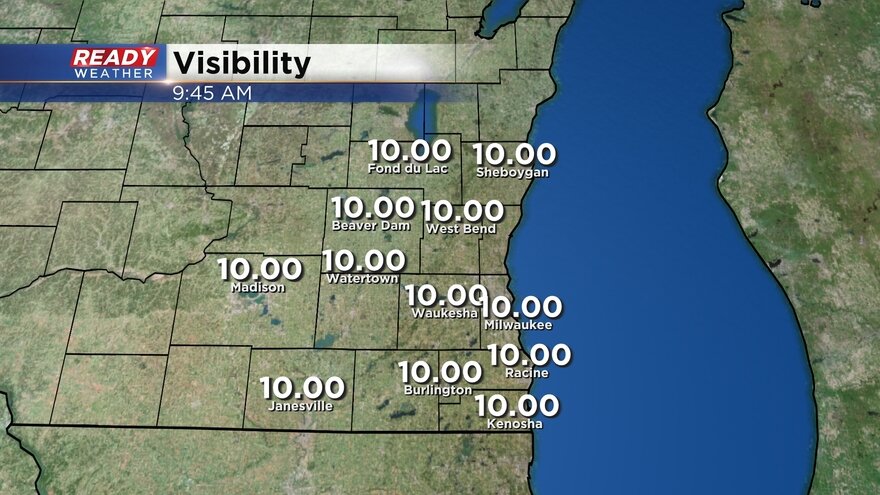 Snow totals still look on track with most picking up 2-5" with isolated spots to 6". Snow will stay fairly steady through the afternoon then become more scattered with lake enhanced snow bands Sunday evening into early Monday.

As of 7 a.m. most of southeast Wisconsin is seeing light snow. Expect that snow to continue moving north and start falling in Fond du Lac, Sheboygan and northern Washington and Ozaukee Counties by 10 a.m. Sunday morning. Here's the latest radar image that will update with time and stay current: 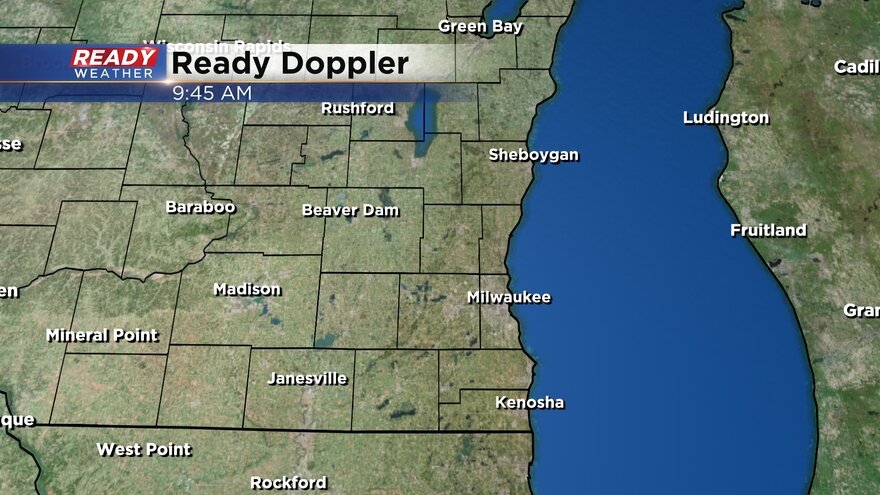 As was discussed Saturday night, the winter weather advisory has been extended into Sheboygan County in effect now until 6 a.m. Monday morning since some lake effect snow may be possible there. The rest of the advisories remain unchanged. 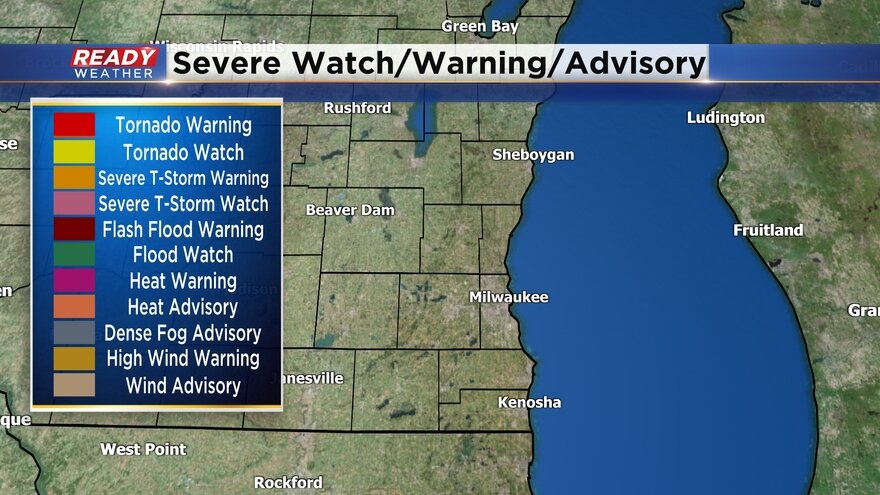 Snow totals still look on track, but there is more consensus that some spots may pick up around or even a bit more than 6". The best chance for that will be around and south of Milwaukee, but could extend as far west as Lake Geneva with lake effect and lake enhanced snow bands.

Snow is on track to arrive in southeast Wisconsin overnight Saturday into Sunday. The earliest flakes will start to fly by 3 a.m. with most spots south of I-94 seeing snow at 6 a.m. and everyone by 9 a.m. Steady snow is expected to last through the afternoon and then turn towards lake effect and lake enhanced snow bands through the evening into Monday morning. 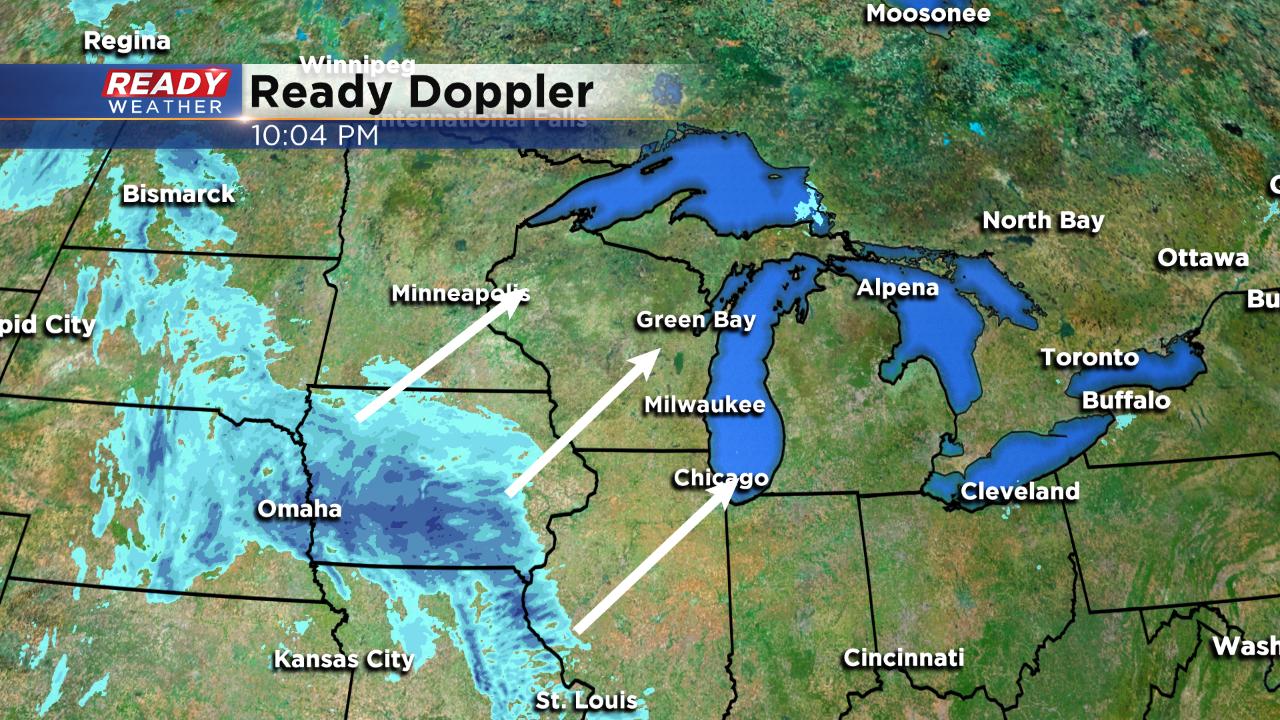 Snow totals still look on track with 2-5" for most. Some spots close to Lake Michigan could see up to 6" where lake effect will be strongest. The National Weather Service has discussed the possibility of adding Sheboygan County to the winter weather advisory due to the possibility of lake effect snow there Sunday afternoon and evening. That change could come sometime overnight if warranted.

It's a new week and that means another round of snow is moving our way. A winter weather advisory has been issued for most of southeast Wisconsin starting Sunday morning and lasting 24 hours. The advisory does not include Fond du Lac, Sheboygan and Dodge Counties where totals will be lower. The advisory goes from 6 a.m. Sunday to 6 a.m. Monday for Washington, Ozaukee, Waukesha, Milwaukee, Racine and Kenosha and from 3 a.m. to 3 a.m. for Jefferson and Walworth Counties. 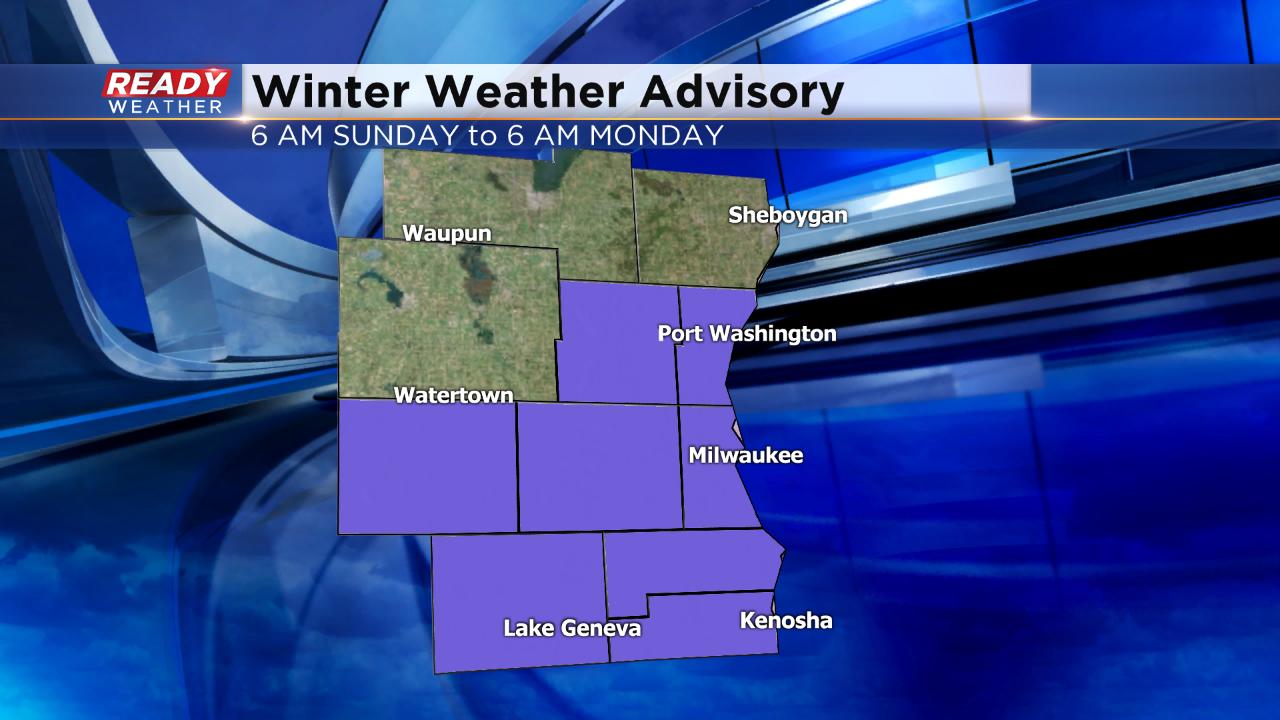 Snow will start moving in early Sunday morning with the steadiest snow happening from mid-morning Sunday through early afternoon before becoming more scattered. 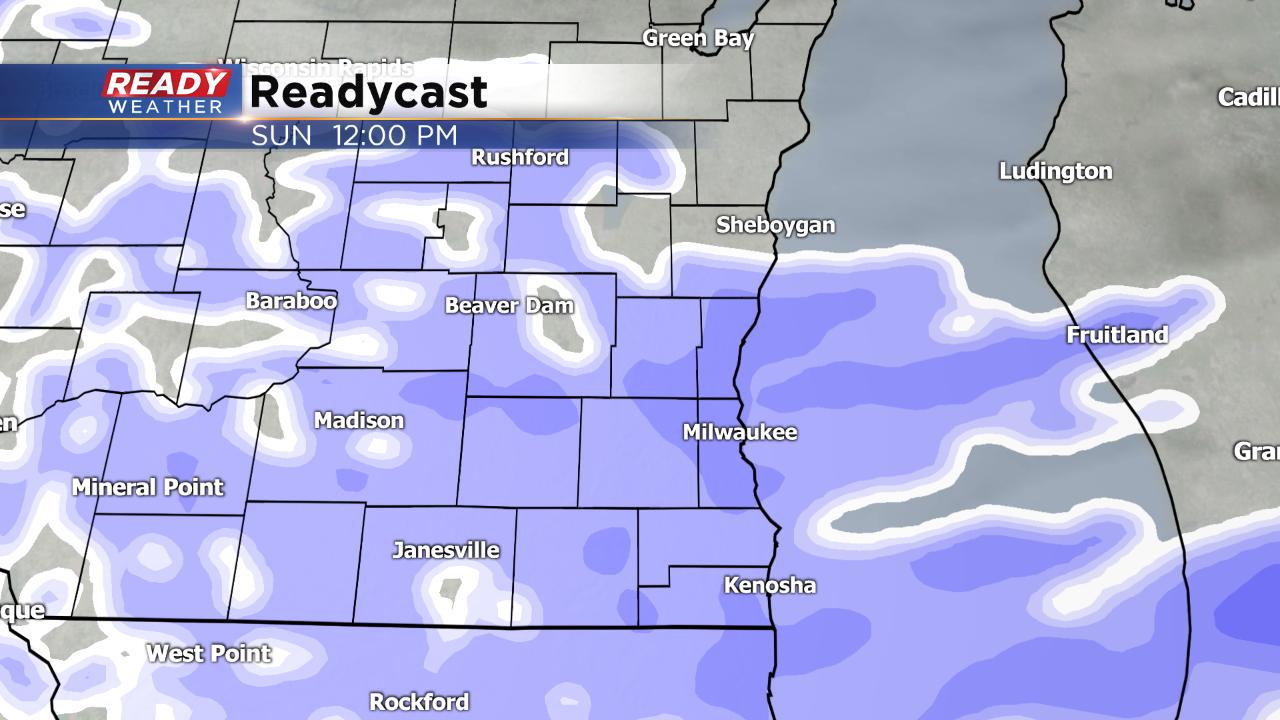 Lake effect and lake enhanced snow is likely during the afternoon lasting until Monday morning for most lakeside spots but as far inland as West Bend, Waukesha and Lake Geneva. 1-3" of fresh snow can be expected in northern spots where there is no advisory and 3-5" for the rest of southeast Wisconsin. The highest numbers will likely happen in spots closest to Lake Michigan where a few isolated spots could see over 5". 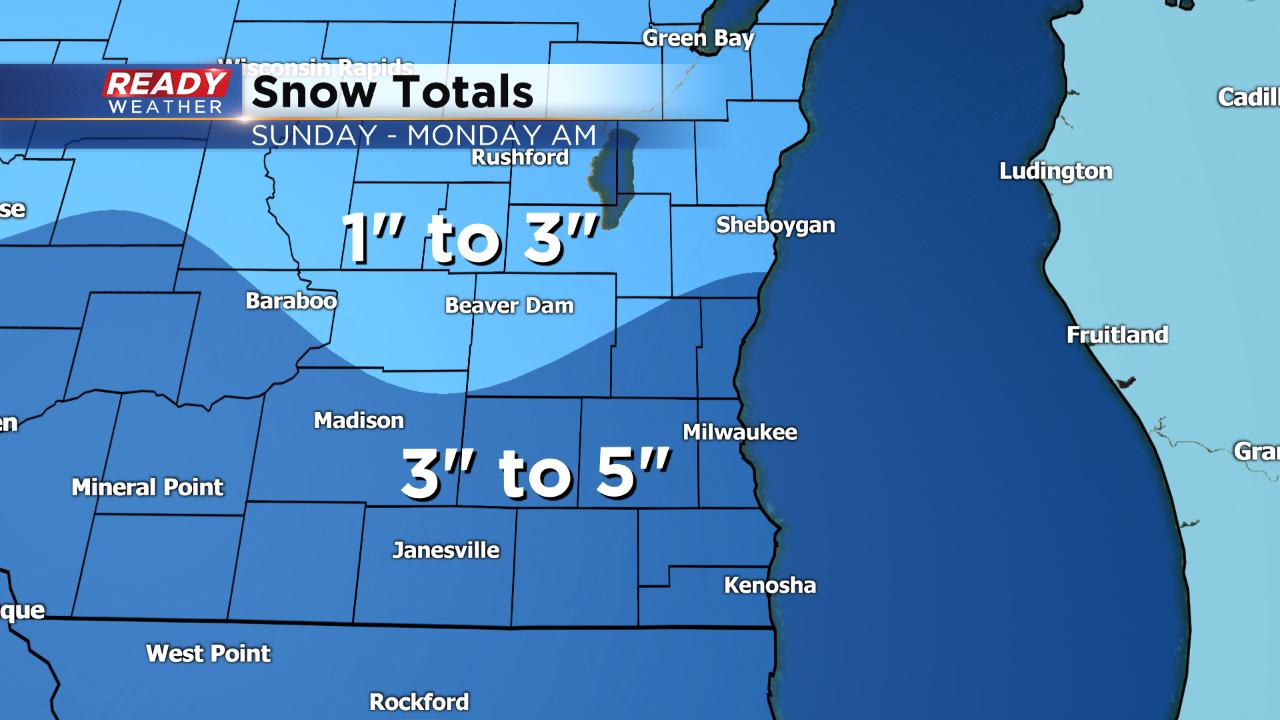 Across the board the threats from this storm will be moderate. Steady snow combined with wind gusts to 25 mph will cause reduced visibility and tricky roads. 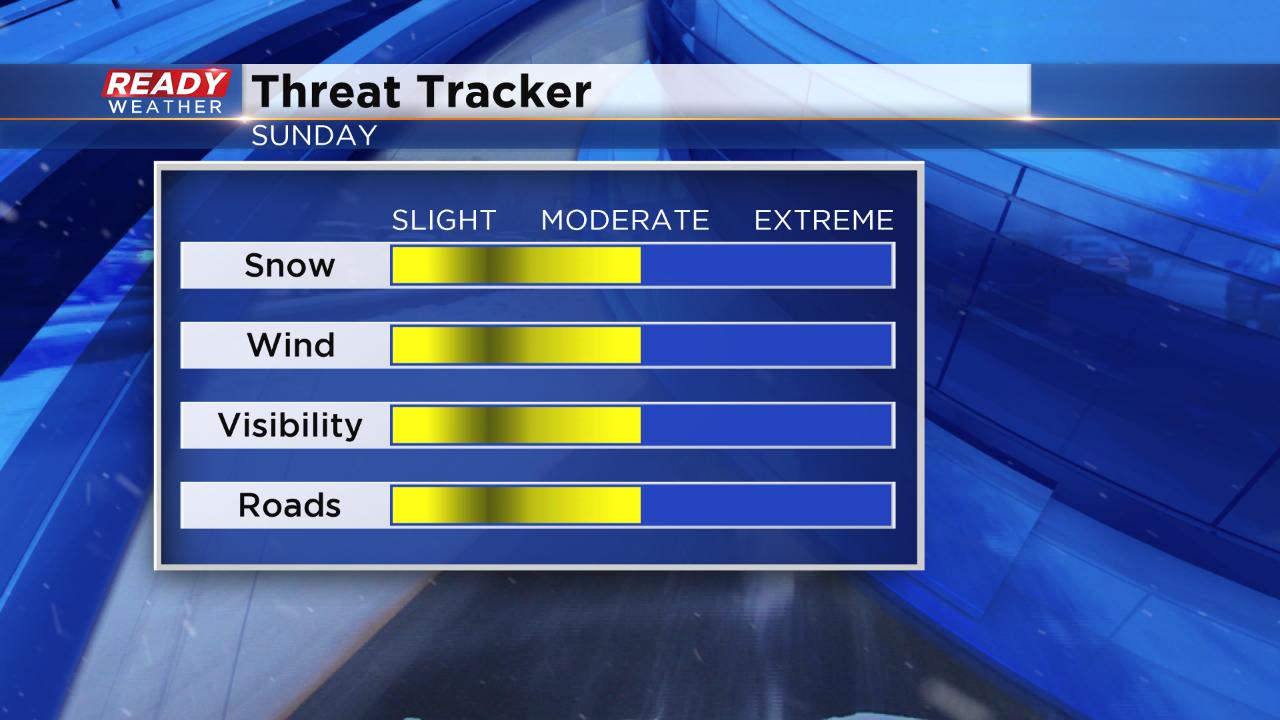 Sunday's snow is not the only storm we are watching. Another one arrives on Wednesday with snow once again looking likely. A few inches look to be possible.