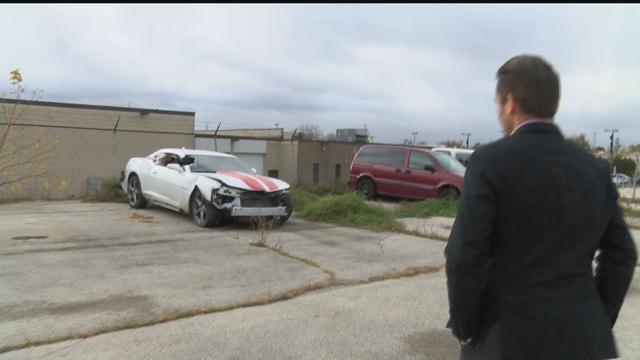 An update to a story we first brought you yesterday. Tens of cars stolen from local dealerships in the past few days, but no one is in custody.
We found out today another dealership was targeted over the weekend.

Seven cars were stolen at Van Horn Latino car dealership early Sunday morning, one of which was returned with at least one bullet hole.
Police can't yet confirm if any of these robberies are related but say they're acting as if they are.

"They took the vehicles in a very dramatic way. Pretty much drove the cars through the doors, broke the doors, went through the outside gate, broke the chains," said Antonio Diaz, general manager of Van Horn Latino.

Seven vehicles were driven right off the lot of the car dealership, with an estimated value of more than $200,000. But this is far from the first time this has happened in the Milwaukee area. Saturday, six vehicles were stolen from Integrity auto,  and Wednesday an F-150 taken from Uptown Motors in Wauwatosa, plus two cars stolen from M&M Motors in West Allis.

They're stealing cars and causing major damage to the buildings

"They took our vending machines, our popcorn machine, water fountain, coffee machine, the tables were all over, like in the road pretty much," said Diaz.

Wauwatosa police tell us there's no evidence officially tying these crimes together but police aren't investigating them as just random acts since there's similarity in how and when they happened. In most cases the thieves are breaking in and then crashing cars through showroom doors.

"By the fire department, we're required to have keys in vehicles when they're inside the building, so they probably knew the keys were in the vehicles," said Diaz.

A few of the stolen vehicles have been recovered and police have found others used in serious crimes, like robberies.
Including one stolen from Van Horn Latino.

That Camaro recovered yesterday. He was involved in an accident and there were two people hurt in that accident so I mean if you think about it I just recovered four cars so I still have another three out there and hopefully they won't be involved in other damage to the public," said Diaz.

Wauwatosa police say they have some leads and they're actively working to find the people responsible.