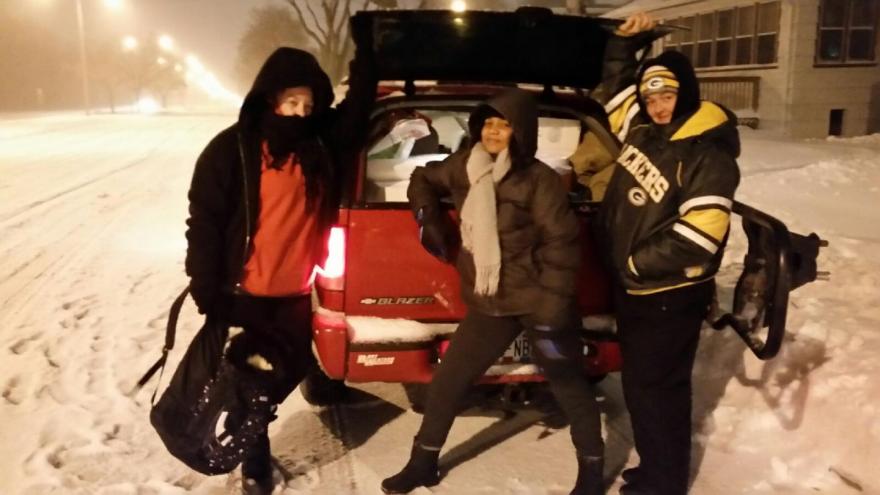 While many were hunkered down for the night, the local group Angels Among Us braved dangerous wintry conditions to check on the homeless people they had been feeding for months.

Kristy Lynn who founded the program which is steps away from gaining its non profit status, says she came upon one group of men all huddled together to stay warm.

"It was cold and miserable and heartbreaking," Kristy explained during the CBS 58 News at 4:30 p.m. "I couldn't sit at home in my warm house and worry about them any longer. Normally they would be in their separate areas. There were in one bed together. Cuddled up, trying to stay warm."

Kristy had extra food ready specifically for situations such as this.

She formed the group quietly with little media attention.

The mission statement behind the group was simple: These angels open their hearts to complete strangers. From the largest to the smallest acts of kindness. Helping complete strangers who are in need 365 days a year. With a world filled with so much evil we have to stand up and show there are still good people out there who really do care about others.

Kristy has begun to trust the media and with help from CBS 58 successfully put together an adopt a homeless person program that secured a hotel stay and holiday meal plus gifts for about 40 homeless people around Christmas.

Their next goal is to get a permanent vehicle they can use to serve their meals and ultimately establish a shelter that not only feeds and clothes but restores dignity to people who have fallen on tough times.

By staying localized, Kristy established long term and meaningful relationships with the people she serves.

Many are families, and at one point had homes of their own, but a crisis of employment or health has made it impossible for them to afford permanent housing.

Or you can write to:

There is a special fundraiser coming up to raise money in a fun atmosphere for the "Angelmobile" as they would like to call it.

Currently they are using their  own vehicles and sometimes take two or three at a time to get the jobs done.

It is becoming more and more difficult with the current vehicle situation.

There will be  a DJ, food, and raffle items.