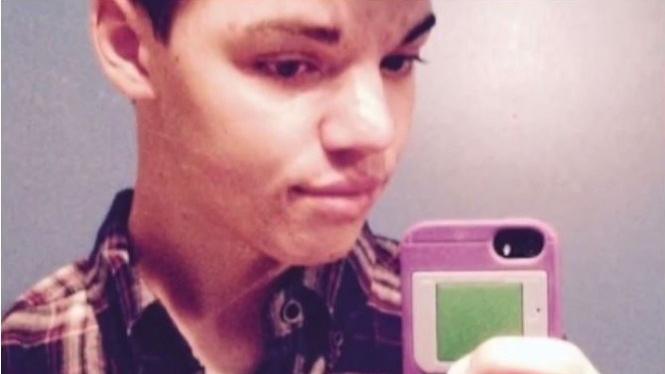 When Ohio teenager Josh Alcorn told his parents he wanted to live as a girl, that he felt trapped in his own body, his parents said they wouldn't stand for that.

"We don't support that, religiously," his mother told CNN Wednesday, her voice breaking. "But we told him that we loved him unconditionally. We loved him no matter what. I loved my son. People need to know that I loved him. He was a good kid, a good boy."

Crossing out the name "Josh," the 17-year-old signed the name he wanted to be known as -- "Leelah" -- in a suicide note posted to Tumblr.

The note was programmed to publish after Alcorn's death Sunday. The teenager was struck by a tractor-trailer on Interstate 71 around 2:15 a.m., about four miles from home in the tiny town of Kings Mills, northeast of Cincinnati.

The Ohio State Highway Patrol is investigating the death as a suicide.

"Please don't be sad, it's for the better. The life I would've lived isn't worth living in... because I'm transgender," the note said. "I could go into detail explaining why I feel that way, but this note is probably going to be lengthy enough as it is. To put it simply, I feel like a girl trapped in a boy's body, and I've felt that way ever since I was 4. I never knew there was a word for that feeling, nor was it possible for a boy to become a girl, so I never told anyone and I just continued to do traditionally 'boyish' things to try to fit in."

The teenager's death has ignited intensely emotional reactions across social media. The hashtag #LeelahAlcorn is carrying messages of support for all transgender people. Many posts are hateful and vengeful notes directed at the teen's parents.

In her interview with CNN, Carla Alcorn referred to her child as her son and used male pronouns.

After his death, a Facebook post apparently from Carla Alcorn said her son "went home to heaven this morning. He was out for an early morning walk and was hit by a truck. Thank you for the messages and kindness and concern you have sent our way. Please continue to keep us in your thoughts."

'He just quit talking about it'

In Leelah's note, she explains that when she was 14, she first understood what transgender meant and "cried of happiness."

"After 10 years of confusion I finally understood who I was. I immediately told my mom, and she reacted extremely negatively, telling me that it was a phase, that I would never truly be a girl, that God doesn't make mistakes, that I am wrong. If you are reading this, parents, please don't tell this to your kids," she wrote. "Even if you are Christian or are against transgender people don't ever say that to someone, especially your kid. That won't do anything but make them hate them self [sic]. That's exactly what it did to me."

Carla Alcorn told CNN that her child was depressed and that counselors and a psychiatrist gave the teenager medication.

"He just quit talking about it (being transgender)," she said.

She was worried Wednesday that hateful messages directed toward her and her husband are making them out to be "horrible people," she told CNN. She has other children, she said, and they are incredibly sad about losing a sibling.

She said that there has not been a service for the teen because people have threatened to protest.

Her child came to her only once to say he was transgender, Carla Alcorn insisted.

The first time she heard the name Leelah was on the teen's suicide note.

"He never said that name before," she said.

'The cruelty of loneliness'

Leelah's suicide note, however, says she struggled for a long time to gain her parents' acceptance as a transgender teen.

"My mom started taking me to a therapist, but would only take me to christian [sic] therapists, (who were all very biased) so I never actually got the therapy I needed to cure me of my depression. I only got more christians [sic] telling me that I was selfish and wrong and that I should look to God for help."

At 16, she wrote that she realized her "parents would never come around" and that she would have to wait until she was 18 to start any kind of medical treatment to transition to being a female.

That, she said, "absolutely broke my heart...I felt hopeless, that I was just going to look like a man in drag for the rest of my life."

She told her child no, she said, because "we didn't have the money for anything like that."

In her suicide note, Leelah said she cried herself to sleep that night.

Leelah told her friends she was transgender.

She came out as gay at school, a move that was supported by friends but made her parents angry, she wrote.

"They wanted me to be their perfect little straight christian [sic] boy, and that's obviously not what I wanted."

Carla Alcorn told CNN that she took away her child's access to social media because the teen was looking at "inappropriate" things on the Internet but would not say what those things were.

Leelah describes what it was like to not have social media to connect with friends: "This was probably the part of my life when I was the most depressed, and I'm surprised I didn't kill myself. I was completely alone for 5 months. No friends, no support, no love. Just my parents' disappointment and the cruelty of loneliness."

It all began to feel like too much weight to the teenager, she wrote. Convinced she had few friends, and feeling the pressure of saving enough money to move out of her home, keep her grades up and face people at church she felt had only judgment for her, she decided to end her life.

Give all of her things and money to the transgender civil rights movement and to transgender support groups, Leelah instructed.

"The only way I will rest in peace is if one day transgender people aren't treated the way I was, they're treated like humans, with valid feelings and human rights. Gender needs to be taught about in schools, the earlier the better. My death needs to mean something. My death needs to be counted in the number of transgender people who commit suicide this year...Fix society. Please."

Two days after the teen's death, grieving in that stomach-punch way that only parents who have to bury a child understand, Carla Alcorn kept repeating that she loved her child.

Not far from where the Alcorns live, Shane Morgan was thinking a lot about Leelah.

The executive director of the Columbus-based advocacy group TransOhio said the teen's suicide evoked memories of what it was like 15 years ago when he struggled with telling friends and family he was transgender.

"I came out as gay...I didn't understand what gender identity was at that time," he said.

As Morgan got older and met different people and had new experiences, he gained confidence and courage.

He wrote a letter to his family and friends telling them he was transgender. With the exception of his father and brother, everyone was loving.

Morgan said he understands the anger some people feel toward Leelah's parents, but "there's no excuse for threats to the family."

Since Leelah's death, parents of transgender children have sent TransOhio photos and letters saying how much the tragedy has shaken them and that they love and accept their children no matter what.

Their greatest fear is that their child will feel unloved. And statistics show that that can lead to suicides like Leelah's.

A 2011 study by the National Center for Transgender Equality found that 41% of 6,450 responding transgender and gender non-conforming people had attempted suicide.

If he could have talked to Leelah, Morgan would have said that he understood how tough it is and how awful it feels. He would have told her that when she got a little bit older, she would be freer to adopt another kind of family -- one of friends who would accept and cherish her.

"I wouldn't have told her that it gets better, but it changes," he said. "There are people she could have met. I don't know if she ever met a transgender person. But she could have seen something else, she could have been given some hope."

Aidan Key also knows well what it's like to endure a transgender adolescence. The founder of the family education and support organization Gender Diversity in Washington grew up in a fundamentalist Christian household and now works with families with deep religious beliefs to help them understand what being transgender means.

He considers himself lucky to have a mother and twin sister who adored him and loved him regardless of his gender identity.

"My compassion is there for the parents. All any parent wants is love for their children, for their children to live good lives. Transgender is such a new thing in society and we've not faced it or discussed it as a society. We've kept it in a dark corner where some people still think it's some deviant sexual behavior," said Key.

"If the parents would have reached out for more information, or said 'This is a lot. We need some time,' or if they had access to a group that would welcome them to talk, that might have made the difference for Leelah."